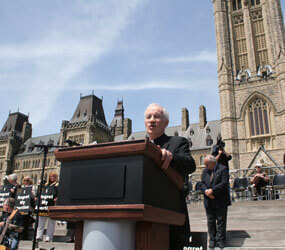 OTTAWA, Ontario – Quebec Cardinal Marc Ouellet vowed not to be silenced on the “crime” of abortion and answered his critics by demanding that the federal government assist pregnant women.

In an interview May 23 and at a news conference three days later, Cardinal Ouellet expressed surprise at the harsh political and media reaction to his recent comments in which he called abortion a moral crime even in cases of rape. He was vilified in the media, and one popular columnist called him an ayatollah and extremist and said the cardinal should die from a slow, painful illness.

“I will not leave things the way they are,” Cardinal Ouellet said. “There is a legitimate debate about promoting human life, about respect for the unborn.”

At a joint news conference in Quebec with Archbishop Terrence Prendergast of Ottawa, the cardinal called for the federal government to provide funding for pro-life organizations that counsel women against abortion.

“Governments are funding clinics for abortion,” Cardinal Ouellet said. “I would like equity for organizations that are defending life. If we had equity in funding, I think we would make lots of progress in Canada.

“I am calling for a campaign of awareness and for programs to help women in distress. There is a lack of information, accompaniment and financial aid for pregnant women in crisis situations to make an enlightened choice,” he added.

He also demanded the federal government end its ambiguity on the issue and stop defunding women’s organizations.

Cardinal Ouelett’s earlier comments drew condemnation from federal and provincial politicians, culminating in a unanimous vote on a resolution in the National Assembly of Quebec May 19 affirming a woman’s right to free abortion.

Cardinal Ouellet was taken aback by the uproar but said he would not be intimidated.

“The abortion debate is on and we must not be afraid of it,” he said. “We must have it, even if there is a motion in Quebec and an affirmation by the prime minister in Ottawa that go in the opposite direction and refuse to reopen legislation on abortion.”

In the interview, the cardinal expressed dismay at the visceral public reaction to his pro-life comments.

“I have no power,” he said. “The church in Quebec has no power anymore. Why such a big reaction? I am just reminding people of the teaching of the church.”

The cardinal also defended the right of church leaders to speak publicly about abortion and “to care for the formation of conscience.”

Cardinal Ouellet reiterated that the church teaches abortion is “considered a crime, a moral crime and a legal crime, too, and the church is asking the states to penalize the practice of abortion.”

“I did not condemn any woman who has had recourse to an abortion,” he added. “God alone is the judge of everybody’s conscience because he alone can measure all the elements in each and every case.

“My objective was to remind (people) of the enormous moral objective with the preoccupation of saving a child’s innocent life and saving the mother from the serious consequences of a deliberately provoked abortion,” he said.