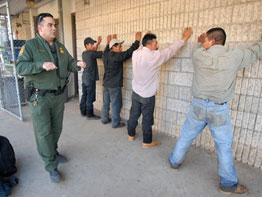 In 2006, Democratic nominee Sen. Barack Obama of Illinois was among those working to try to pass the ill-fated comprehensive immigration reform bill co-written by Republican nominee Sen. John McCain of Arizona and Sen. Ted Kennedy, D-Mass.

Although they were on the same page two years ago, as the 2008 election approaches, distinctions between the two candidates on the issue have become more pronounced.

Both candidates’ policy statements on immigration contain many of the elements promoted by the U.S. Conference of Catholic Bishops in its election guide, “Forming Consciences for Faithful Citizenship.” But the ways in which they say they would approach their policy goals diverge, with Sen. McCain now taking an enforcement-first approach, while Sen. Obama continues to support addressing a wide range of problems at the same time.

“Faithful Citizenship” calls for a reform plan that includes “a temporary work program with worker protections and a path to permanent residency; family reunification policies; a broad and fair legalization program; access to legal protections, including due process and essential public programs; refuge for those fleeing persecution and exploitation; and policies to address the root causes of migration.”

The 2006 McCain-Kennedy bill would have provided a path to legalization for many of the estimated 12 million immigrants who are in the country without proper documents, reformed the family immigration system and created a new temporary-worker program.

That bill and several subsequent versions crafted over the next year failed to get enough Republican support to come to a vote in the Senate. The House has held hearings on assorted immigration bills, but has not brought a wide-ranging bill to the floor. The few bills that have come through Congress and made it into law in the last several years have all been focused on a border fence and enforcement measures.

As the presidential campaign progressed over the last year, Sen. McCain said he no longer would support his own bill because he has come to believe the U.S.-Mexican border must be secured against illegal entry before changes are made in law or policy. The immigration plan on his campaign Web site says that only after border-state governors certify that “the borders are secure” would he work on other immigration issues.

Those later steps would include prosecuting “employers that continue to hire illegal immigrants,” addressing labor demands for immigrant workers, and dealing with the backlogs in family immigration and the millions of undocumented immigrants already here.

Sen. Obama’s immigration plan backs the multipronged approach referred to as comprehensive reform. While he also talks about better equipping border agents, he would at the same time seek a legalization program and make family immigration easier, according to his Web site.

Se. Obama has said he would push for a comprehensive immigration reform bill in his first year in office.

Like Sen. Obama’s plan, Sen. McCain’s plan would require undocumented individuals to register, pay fines and back taxes, undergo background checks and wait for permanent legal status behind applicants who are applying for residency through the normal process.

Sen. McCain’s proposal adds, “The program will also ensure that all undocumented aliens either leave or follow the path to legal residence.” It does not elaborate on how that would work.

A key to Sen. McCain’s shift in stated priorities on immigration lies in the “enforcement-first” emphasis of the GOP’s base.

The Republican Party’s platform takes a more stern approach to immigration than Sen. McCain has. It devotes lengthy sections to “the rule of law” as the overriding principle for immigration policy, and says “we oppose amnesty.” It also says “the American people” have rejected the idea of mass legalization. It calls for completing the fence on the Mexican border, denying federal funds to “sanctuary” cities that don’t actively seek information on immigration status and opposes allowing undocumented immigrants to have driver’s licenses.

Kevin Appleby, director of migration and refugee policy for the USCCB, said he believes that as president either Sen. McCain or Sen. Obama would “engage the issue.”