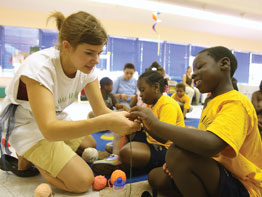 On the surface, the mission of Camp St. Vincent sounds like every other camp: make it a summer that children will never forget.

For camp director Shannon Hayes, however, bringing smiles to the faces of campers who come from low-income or homeless families is vital.

On an early July afternoon, he stood at one of the doorways to Head Start’s southeast building, across from Patterson Park in east Baltimore, offering a “Good morning!” or “Buenos dias!” as the camp’s youngest attendees headed out for a day of activities.

Many of the campers see the toughest elements of city life. No one is more aware of that than Mr. Hayes and his staff, who want the children to know the world cares about their futures.

Since 1907, the Society of St. Vincent de Paul has held the free camp for Baltimore-area children ages 5-11. The campers attend through mid-August, thanks to sponsorships and grants.

Many campers return each year, and former attendees serve as counselors in training, remaining in a safe environment while attaining leadership skills.

The camp mixes fun, like swimming at Patterson Park, with educational activities. One hour they can be learning about the ecological lessons from the movie “Wall-E,” and in the next, take reading or math classes.

Jocelyn Bocchino, who recently earned her master’s degree in arts and teaching at the Maryland Institute College of Art, has worked at the camp all summer. During the day, she taught campers how to do craft projects, and celebrated a week’s worth of their art.

Children laughed and smiled while working with their classmates. They proudly showed off their art to Ms. Bocchino, who warmly told each of them their work “was beautiful.”

Some art by campers reflected their personal emotional trials, including the death of someone close. The camp, Ms. Bocchino said, has been mutually therapeutic.

“As an artist, I see it as a way to release and a way for kids to learn and let out emotions that are not in writing,” Ms. Bocchino said. “I think it helps me understand whatever is going on and to be able to actually feel their emotions.”

No matter how tough their family environment, Mr. Hayes said the children are encouraged to leave their troubles behind during the camp, which is being held at Patterson Park for the first time after years at other parks and at the Monsignor O’Dwyer Retreat House in Sparks.

“I try to look at each kid as the same child, so we don’t have any type of barriers, any type of distinctions, any stigmas,” Mr. Hayes said. “Our job, for a child who comes into our program, is to make sure they have the best summer they can possibly have.”

Now in its 101st year, Mr. Hayes said that Camp St. Vincent remains vital for the future of Baltimore’s children.

“I think Camp St. Vincent serves as a stability factor for these kids,” he said. “During the school year, a lot of them are in flux, so a lot of them don’t know where they’re going from pillar to post. Each year, we give them that stability, so they look forward to coming to camp.”