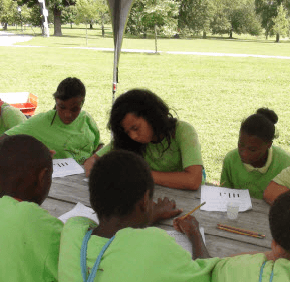 If 10-year-old Zaire Avery were not spending the summer at Camp St. Vincent, she knows where she would be instead: “In the house, on the couch, eating chips and watching Mickey Mouse, probably,” she said.

She is glad to be at the day camp, she said with a big grin.

“Instead of sitting in the house all day, I can be out doing something fun,” she said.

Avery, who aspires to be an artist or hip-hop star someday, is one of 130 campers attending Camp St. Vincent, a day camp run by St. Vincent de Paul of Baltimore in Patterson Park for youths ages 5 to 12.

Like kids at most day camps, the campers spend time swimming, making art and brushing up on school subjects.

Unlike kids at other camps, each child is homeless.

Camp St. Vincent draws campers from 18 shelters and transitional housing developments in Baltimore City and Baltimore County, busing them to and from Patterson Park, Monday through Friday, for eight weeks.

Its final day this summer is Aug. 10, when parents will join their children for a carnival showcasing the campers’ accomplishments.

At 104 years old, the camp is one of St. Vincent’s oldest programs. It once catered to other low-income children, but transitioned to a camp exclusively for homeless youth a few years ago.

In addition to sports, songs and drama, the camp’s curriculum includes math, reading and social-emotional development. A theme each week encourages campers to act in positive ways and set goals.

Some kids tell camp director Vena Carter that it’s the best summer they’ve ever had.

“As an educator, one of the most fun things about coming to camp is that every year I get to meet a new group of kids,” she said. “They come eager, ready to learn, they want to have fun, and it’s actually one of my passions in giving back to the community.”

At $38 per child per day, the camp is supported by public and private funding, Carter said. Private donors also help by providing snacks, swimsuits and school supplies.

Camp is good for parents, too, Carter said. They know their kids are safe and having fun helps while they look for housing or work, take classes or address other challenges of homelessness, Carter said.

Toya Suite has three children at the camp, ages 11, 9 and 6. She calls Camp St. Vincent a “lifesaver” that allowed her to spend the summer taking certified medical assistant classes.

Suite lost her job as a hair stylist nine months ago and couldn’t afford her apartment’s rent. She and her children stayed with friends and family for awhile, but moved to Night of Peace Family Shelter in Baltimore County two months ago, she said.

The camp has been good for her kids, too, she said.

“It allowed them to have an outlet and talk to kids who are in a similar situation as them,” Suite said, adding that it also relieves some of the stress homelessness places on them.

Homeless children often move several times throughout the school year as their housing situation changes, causing them to fall behind in school, Carter said. Camp St. Vincent tests students on their progress throughout the summer, often with good results.

As a volunteer counselor, Alexus Roane, 16, spends her days helping campers with reading and math, but she also strives to be a good role model and make the kids feel special, she said.

“We try to make sure they have a really good time,” she said.

When camp ends, Avery will miss the counselors the most, she said.

“I have good counselors, because I know that if I have a problem, they’ll be there,” she said.