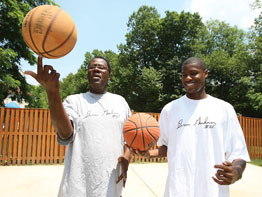 The phone calls started early on June 15 at the home of Ernie and Karen Graham.

The NCAA recruiting guidelines list that as the magic date for Division I colleges to begin contacting those rising juniors who are at the top of their game and look to play at the next level.

One such rising junior, 6-foot-8 Jonathan Graham, son of former University of Maryland great Ernie Graham, has been getting his fair share of inquires, as the student-athlete at Calvert Hall College, Towson, is one of the area’s premier players.

In 2006, Graham was thrown into the varsity ranks as a lanky freshman. Yet one year later, he elevated his game and earned the honor of being named an MIAA all-star as a sophomore, averaging more than 20 points, 12 rebounds and four blocks per game.

“The sky’s the limit for Jonathan,” said Cardinals Head Coach John Bauersfeld on June 19, as he sat on the sidelines watching members of his upcoming 2008-2009 squad pick apart Parkville High School in the McDonogh School summer league.

Also on the sideline was Graham’s father, Ernie, who has never missed one of his son’s games and remains his strongest advocate.

The elder Graham played for the Terps from 1977 to 1981. In December 1978, as a sophomore, he scored 44 points against North Carolina State – still the Maryland single-game record nearly 30 years later.

Graham was named Atlantic Coast Conference first- and second-team all-tournament in consecutive years, and he helped the Terps to an ACC regular season title and three berths in the NCAA tournament.

Graham was taken in the third round of the NBA draft by the Philadelphia 76ers. After a series of personal missteps, he competed professionally overseas for 13 years, with stops in Israel, Europe and South America.

After a long battle with drugs and alcohol, Graham has been sober for the past 13 years and works with the Baltimore County Department of Health, Bureau of Substance Abuse, providing the acclaimed after-school children’s program “Get The Message.”

“Basketball was my whole life,” said Mr. Graham. “I really didn’t want Jonathan to play basketball because there can be so many negatives. I didn’t want my son to experience that.”

The younger Graham is nonetheless on pace to become a top recruit in the 2010 graduating class and works hard every day to improve his game.

“I think the strength of my game is my inside game and right hook,” said Jonathan. “But I know I need to work on everything to keep improving.”

Graham is challenged by going up against the tougher players whenever he can. A perfectionist, he loves the challenge.

His game consists of a sound inside-outside approach. He can drop a soft jumper from just inside the free-throw line, control the ball from midcourt on a fast break and convert in transition. He also has a dominating presence underneath, both on offense and defense.

To his credit, Graham is a very disciplined player, working within the systems of the Cardinals’ offense.

Though Jonathan’s top hobby seems to be basketball, his father encourages him to “stay a nice guy” and enjoy his life.

“He is strong, confident and focused,” she said. “He’s a perfectionist, and he gets that from me.”

She has been pleased with Jonathan’s progress while at Calvert Hall, especially in the academic and leadership realm.

“Jonathan has elevated himself academically and socially and has improved his skills continuously,” she said.

“My wife and I just want Jonathan to be a well-rounded person,” his father said. “To us, relationships are the most important thing along the way, and that’s one of the reasons we chose Calvert Hall.”