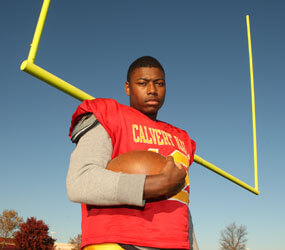 When Adrian Amos and his classmates entered Calvert Hall three years ago, its football program was near the bottom of the Maryland Interscholastic Athletic Association A Conference

Now, the Cardinals are The Sun’s No. 1 team.

Only one obstacle stands between Calvert Hall (10-1) and its first MIAA championship: Loyola Blakefield. The chance to win the conference just happens to coincide with the biggest game of the year: the Nov. 25 Turkey Bowl at M&T Bank Stadium.

“Their goal is what we want,” Amos said of Loyola. “At Calvert Hall, if you don’t win the Turkey Bowl, it doesn’t matter whatever you did the rest of the season.”

Calvert Hall snapped a seven-game losing streak in the traditional rivalry with a 47-28 victory last season.

“I like to be a part of the team that started the renaissance,” Amos said. “We’re picking up the program and bringing Calvert Hall back to where it was in the 1970s and 80s.”

“Coach Davis is the most dedicated coach I’ve ever seen,” he said. “He’s in the office even on Sunday nights.”

Amos participated in Overlea recreation programs growing up, playing the quarterback and linebacker positions. Once he arrived at Calvert Hall, he transitioned to safety and blossomed. He also is a wide receiver and has accepted a scholarship to play for the University of Connecticut next fall.

Now that his final high school game is here, Amos is ready to cement a legacy.