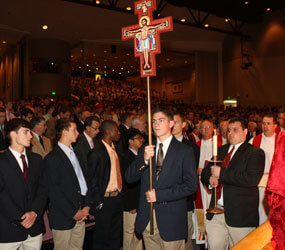 Calvert Hall College High School launched the start of a year-long celebration of its 50th anniversary on its Towson campus with a Mass of the Holy Spirit Sept. 21.

Archbishop Edwin F. O’Brien celebrated the Mass, which included students, faculty, families and staff, on the feast of St. Matthew.

During his homily, the archbishop reminded those in attendance that Matthew gave up his career as a tax collector to follow Christ. He said Calvert Hall inspires young people to follow Jesus as well.

Calvert Hall previously operated at Mulberry and Cathedral Streets, the site of the current Archdiocese of Baltimore’s headquarters. The school moved to their current campus on LaSalle Road in September 1960. The school has been conducted by the De La Salle Christian Brothers since its founding in 1845.

A graduate representing each class since 1960 processed into McManus Theatre before Mass.

Brother Thomas addressed the graduates, thanking them for paving the way for current students.

“While much has changed since you graduated, know that our Lasallian tradition of developing young men of faith, intellect and integrity has not,” Brother Thomas said. “Your presence with us today is a reminder to our students, the young men who follow in your distinguished footsteps, of the rich tradition that they are very much a part of.”

Archbishop O’Brien praised the selfless commitment of the Christian Brothers throughout the years.

“What a difference they have made in forming this culture of ours,” the archbishop said. “You come (students) first. You’re their family. They give their lives to you so you can become what God created you to be and fulfill that potential.”

Rogers owns his late grandfather’s graduation ring and can’t imagine his life without the school.

“Looking back on it this year, there’s a lot of tradition,” Rogers said. “It’s an important community. It’s a brotherhood. That’s something from my grandfather on down to everyone in my class feels. It’s a community bond.”

Senior Rob Walker followed in the footsteps of his father, Todd, who graduated in 1983. His father brought him to the campus regularly before he attended Calvert Hall. He felt an unmistakable mystique.