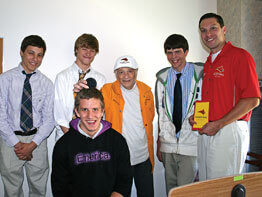 As he approached death in the fall of 2008, Joseph Barranco was in terrible pain. Living at Baltimore’s St. Elizabeth Rehabilitation & Nursing Center, the Halethorpe resident had become edgy as he suffered from bladder cancer and the early effects of dementia.

He wouldn’t eat, watch movies or see visitors. His wife of 11 years, Pat, just wanted him to remember the man that was inside – the one who brought her so much joy.

“He was just a wonderful human being,” said Mrs. Barranco, a parishioner of Our Lady of Victory in Arbutus. “My husband was quite a kidder. He made me laugh. Oh, did he make me laugh.”

One day brought a breakthrough. The 75-year-old patient told staff members how much he loved hockey and Towson’s Calvert Hall College High School, where he graduated in 1952.

A few days later, Calvert Hall ice hockey coach Mike Shramek received a message at the school that an alumni was dying of cancer and wanted to meet his players.

“It was surprising,” Mr. Shramek said. “No one at the school had heard of a request like that.”

Still, it was a Calvert Hall brother in need. On a mid-October Friday afternoon, he gathered four of his players, including junior Joey Vonakis, senior captain Andrew Klick, sophomore Doug Parker and senior Patrick Goheen, and went to St. Elizabeth’s armed with a team hat, an action photo and a game puck. Mr. Shramek didn’t want to disappoint Mr. Barranco if the team’s schedule conflicted, so he kept their arrival a surprise.

Wearing the jackets commemorating their 2008 Maryland Interscholastic Athletic Association championship, the school’s first hockey title since 1955, they approached Mr. Barranco’s room unsure of what was ahead. The players, Andrew Click said, knew only a former Calvert Hall hockey player was dying. Would he be too frail to interact?

“He stood up out of his bed and ran over to us,” Andrew recalled.

Pride began to swell on both sides. Mr. Barranco put on the championship jacket of one of the players.

“It was the same jacket he would have worn at Calvert Hall,” Mr. Shramek said. “It hasn’t changed. It was a link between him and the kids.”

Life returned to Mr. Barranco. The pain subsided, if only during the hour-and-a-half visit. They talked about hockey, played cards and posed for photos.

“He stood up and placed the puck on (Doug Parker’s) head,” Andrew said. “He had a great sense of humor. He was a smart aleck.”

As they concluded the visit, the players made a commitment to see Mr. Barranco again. Later that day, Mrs. Barranco arrived at St. Elizabeth’s, only to hear her excited husband recount the story.

Was he making it up?

When she saw the photo, hat and puck, she realized his wish had been granted.

“To see him that happy about something again, I can’t describe how much it meant to me,” Pat said. “You had to see the look on his face. It was like the old Joe again.”

The team returned weeks later. Mr. Barranco was different and there were signs something was wrong. Still, they enjoyed their visit, unaware it would be their last.

On Nov. 13, Calvert Hall hockey players were in their locker room when Mr. Shramek broke the news their new friend had died.

“I don’t know how you guys feel,” Andrew told his teammates, “but I think we should dedicate our season to him.”

Mr. Barranco stays with them now, as they march toward another potential championship. Some players have put his initials onto their jacket collars, a fact that nearly brings Mrs. Barranco to tears.

“I hope their parents realize how lucky they are,” she said. “I’ll never forget what they did for Joe.”