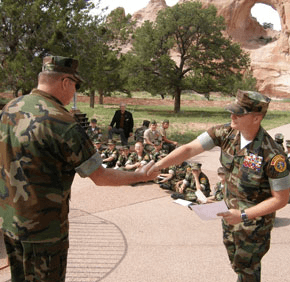 Young Marine Staff Sgt. Giovanni Mattucci, a senior at Calvert Hall College High School in Towson, was one of more than 175 Young Marines from across the U.S. who attended National Navajo Code Talker Day Aug. 14 in Window Rock, Ariz.

This was the 30th anniversary of the National Navajo Code Talker Day.

The Young Marines, a national nonprofit education and service program for youths in primary and secondary schools that teaches leadership, teamwork and self-discipline, has assisted the Navajo nation in commemorating the day, Mike Kessler, national executive director of Young Marines, said in a statement.

“Although lost on many calendars, the Young Marines take special pride in letting the Navajo Code Talkers know that their valued contribution to our victory in the Pacific during World War II is legendary,” Kessler said in the statement, “and we will never allow Aug. 14 to pass without proper respect.”

At the event, the Young Marines led event attendees in the Pledge of Allegiance, the national anthem and marched in a parade to honor World War II veterans.