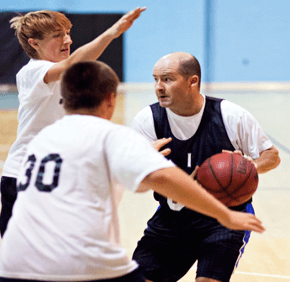 WESTMINSTER – James Boric was sweaty from running, dribbling and shooting a basketball.

Boric, who scored countless points for his team, isn’t trying out for the NBA. The third-year theology seminarian at Mount St. Mary’s Seminary in Emmitsburg was one of more than 10 Baltimore priests and seminarians who challenged about 20 middle, high school and college youths Sept. 14 at Westminster High School in a game that was serious and spirited.

The youths were from St. John Parish in Westminster, St. Peter the Apostle in Libertytown and St. Bartholomew in Manchester.

The game was an effort to foster vocations. Before it began, Father Michael A. DeAscanis, director of vocations for the Archdiocese of Baltimore and the coach of the priests and seminarians, spoke about vocations to the nearly 300 people gathered.

“He (Jesus) walked the walk, he gave it all,” Father DeAscanis said. “The question, especially for all the young men and women here, is ‘are you willing?’ When you give your future to God – it’s going to be good.”

To navigate a slideshow, click on the arrows below.

Father DeAscanis wants parents to teach their children the following daily prayer:  “Lord, show me your will for my life, and help me to desire it.”

“If we pray that prayer every night, we’ll end up where we’re supposed to be,” Father DeAscanis said, referring to an increase in religious vocations.

“We have to give the nod to youth,” Father DeAscanis said.

Boric said the event was a way for the youths “to see that we’re normal guys. We can do what they do, too. We can talk about vocations all we want, but if they’re not inspired by somebody, they’re not going to answer that call.”

Father Jesse L. Bolger, associate pastor of Church of the Crucifixion, Church of the Good Shepherd and Holy Trinity, all in Glen Burnie, said it’s important to “create a Catholic culture where young people can see seminarians and priests are normal guys.”

“This event shows the energy and how alive the church is,” said Father Bolger, who played.

Henry Payne, 16, a parishioner of St. John, Westminster, who played in the game, said the event was “something different.”

“It’s good to see them out doing things I don’t expect them to do,” Payne said.

Another player, Trevor Masimore, 16, a parishioner of St. John, Westminster, called it “a good idea.”

“Hundreds of people are here to see priests and seminarians play basketball,” Monsignor Farmer said. “That plants seeds in the minds of young people.”

The next “Men in Black” game is scheduled for Nov. 2 at Archbishop Spalding High School in Severn.