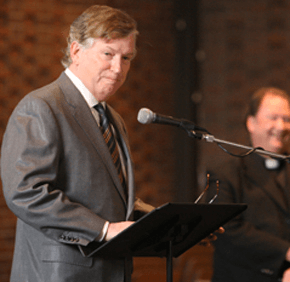 By Catholic Review Staff
Frank P. Bramble Sr. has been named interim president of Calvert Hall College High School in Towson, effective July 1, the school announced June 13.
Bramble’s appointment comes days after Christian Brother Thomas Zoppo, president of Calvert Hall since 2009, announced his resignation, citing personal and professional reasons. Brother Zoppo’s resignation is effective June 30.
Bramble, a Calvert Hall alumnus, was appointed by Christian Brother Dennis Malloy, provincial for The Brothers of the Christian Schools District of Eastern North America (Christian Brothers provincial), in collaboration with Calvert Hall’s board of trustees, according to information from Calvert Hall.
The Catholic Review previously reported that Bramble chaired the Archdiocese of Baltimore’s Blue Ribbon Committee on Schools, an archdiocesan-wide capital campaign and was vice chairman of the archdiocesan school board.
In addition, he has served on boards at Calvert Hall, Catholic Charities, Maryvale Preparatory School in Brooklandville, Loyola University Maryland in Baltimore, Constellation Energy and the University of Maryland Medical School.
Bramble is a member of Bank of America Corporation’s board of directors and a retired vice chairman of MBNA, according to information from Calvert Hall.
“The board of trustees enthusiastically welcomes Frank back to the school to assist during this transition and appreciates his willingness to serve,” said Stephen J. Budosh, chairman of Calvert Hall’s board of trustees, in a statement. “We are fortunate to have someone of Frank’s character, experience and expertise to lead the institution at this time.”
See also:
Calvert Hall’s president announces resignation
Copyright (c) June 17, 2013 CatholicReview.org
PrevNext