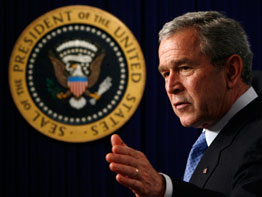 WASHINGTON – When President George W. Bush and Pope Benedict XVI meet in April in Washington, they will continue discussions begun during Bush’s 2007 visit to the Vatican on the two leaders’ “common commitment to the importance of faith and reason in reaching shared goals,” according to the White House.

A Feb. 15 statement from the press secretary’s office said that “these goals include advancing peace throughout the Middle East and other troubled regions, promoting interfaith understanding and strengthening human rights and freedom, especially religious liberty, around the world.”

The pope is expected to arrive at Andrews Air Force Base outside Washington April 15 in the late afternoon. He will be greeted by Bush and the first lady, as well as by local church dignitaries, and both the pope and the president are expected to make brief remarks.

On April 16 Bush will welcome the pope on the south lawn of the White House at 10:30 a.m., then the two leaders will go inside for private talks. It’s only the second time in history that a pope has visited the White House, and it takes place on the pope’s 81st birthday.

Among other events on the pope’s Washington agenda are a prayer service with U.S. bishops at the Basilica of the National Shrine of the Immaculate Conception and a Mass at the new Nationals’ baseball stadium in Washington.

The pope will arrive in New York April 18 and will address the United Nations that morning. While in New York he also will celebrate Mass in St. Patrick’s Cathedral and at Yankee Stadium and visit ground zero. He will depart from John F. Kennedy International Airport at 8 p.m. April 20 to return to Rome.