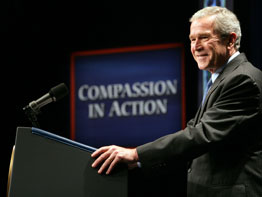 WASHINGTON – President George W. Bush told a room full of leaders of religious social organizations June 26 that his faith-based and community initiative has been one of the most significant programs to come out of his administration and urged them to continue saving the lives of those in need in the U.S. and abroad.

“Groups like yours have harnessed a power that no government bureaucracy can match,” Bush said during his address at the White House National Faith-Based and Community Initiatives Conference, held June 26-27.

“So when I came to Washington, my goal was to ensure that government made you a full partner in our efforts to serve those in need. And the results have been uplifting,” he said.

The president established the White House Office of Faith-Based and Community Initiatives by executive order in December 2002. In essence, the program is designed to give organizations run by religious groups equal footing with secular groups in eligibility for federal funding for programs they operate to help the poor and needy.

The move met with skepticism among established Washington political leaders, many of whom were concerned the initiatives would cross the line between church and state.

However, the U.S. Supreme Court has rejected claims that federal involvement with faith-based groups is unconstitutional and political leaders in both the Democratic and Republican parties have embraced the partnership between the government and religious groups in such causes as addiction recovery, prisoner re-entry into society, health services, HIV/AIDS, homelessness and at-risk youths.

“We have helped level the playing field for faith-based groups and other charities – especially small organizations that have struggled to compete for funds in the past,” Bush said. “We’ve educated religious groups about their civil rights. We’ve made the federal grant application process more accessible and transparent.

“We’ve trained thousands of federal employees to ensure that government does not discriminate against faith-based organizations. We’ve ensured that these groups do not have to give up their religious character to receive taxpayer money,” he said.

In 2007 faith-based organizations received more than 3,200 grants, totaling more than $2.2 billion, said Jay Hein, deputy assistant to the president and director of the White House Office of Faith-Based and Community Initiatives.

With more than 200 speakers at the two-day conference, Hein said it was his office’s job to inspire participants to continue their philanthropic work and find the assistance they require to reach out to those in need.

Both presumptive nominees for president – Democratic Sen. Barack Obama and Republican Sen. John McCain – have said they plan to continue the faith-based initiatives if elected to office in November, he said.

“If a nonprofit organization has a good program for fighting gang violence, the Department of Justice should be able to fund it,” said Michael B. Mukasey, U.S. attorney general. “It should not, and now does not, matter in the slightest if that group has a Catholic priest on its board of directors.”

Faith-based organizations have the experience and know-how to run relief programs efficiently, and with federal funds they will be able to reach out to more people in an effort to improve their lives, Mukasey said.

“If someone has developed an innovative program to help teach life skills to prison inmates, to help them become productive members of society once they’ve served their time, it should not, and now does not, matter in the slightest if the person teaching that class wears a Jewish yarmulke or a Muslim ‘kufi,’“ he said.

“What should, and now does, matter a great deal is that a program is effective, and that all groups, including faith-based groups, have an equal opportunity to compete” for funding, he added.

With 60 million people volunteering in the U.S. – a third of whom help out through faith-based groups – and charitable donations at a record-breaking $300 billion in 2007, Bush said these figures prove the initiatives are successful.

He also pointed out the partnership reaches beyond U.S. borders to those in need globally.

“When we were in Tanzania, we went to visit a clinic where a 9-year-old girl was HIV-positive, and she’d lost both her parents to AIDS,” Bush said. “And for the last year, Catholic Relief Services had been helping the girl. And her grandmother said this: ‘As a Muslim, I never imagined a Catholic group would help me like that.’ And she went on to say, ‘I’m so grateful to the American people.’“

CRS is the U.S. bishops’ overseas relief and development agency.

Throughout the two-day conference, the hundreds of participants were told how to expand their programs, engage social entrepreneurs through vouchers and other mechanisms, and attract private sector money and expertise, among other useful tools for their organizations.

Witnessing the work in faith-based programs from Baltimore to Africa has proved to him that God’s followers are living all around him, he said.

“So I’ve been proud to stand by you as you have worked these miracles across our country,” Bush said. “You probably don’t even realize some of the acts of kindness are miracles. I’m telling you they are. And you can find it in the hopeful expressions on the people you’ve helped.”