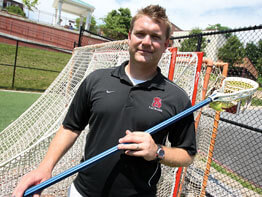 Zack Burke, the head boys’ lacrosse coach for Archbishop Spalding High School in Severn, is the father of two young sons, with one on the way.

That only scratches the surface of the mentoring and parenting done by Burke, who is also somewhat of a surrogate father to a younger brother.

Burke, 30, has grown from a gifted player into a gifted coach. He was a star defenseman at St. Mary’s High School in Annapolis, and then at the University of Maryland Baltimore County, where his efforts for Coach Don Zimmerman in a collegiate career that ended in 2000 earned him a spot on the Retrievers’ all-time team.

Whether it was playing professionally, both indoors and out, or now as a coach, Burke has continued to distinguish himself.

Transitioning from player to coach, Burke saw a need at Spalding. He joined the Cavaliers’ staff before the 2007 season, when he led the junior varsity to a 12-5 record.

In 2008, Burke was named varsity head coach and led the Cavs to a 9-8 record. They qualified for their first MIAA A Conference play-off appearance by beating eventual champion Loyola Blakefield, Towson, 12-9.

Burke, who is adamant about focusing on the fundamentals of the game, was recently named the Baltimore metropolitan area Coach of the Year by The Sun.

Burke has done all that in the face of tremendous adversity over the last 15 years, coping with the death of both parents and proudly taking on the commitment of raising his younger brother, Matt, 17, who is also one of his Spalding players.

Their father, a former college football player, member of the Green Berets in the U.S. Army and a dedicated family man, according to Zack, suddenly died of a heart attack at the age of 52.
Zack was 16 – Matt just 3.

“From that point forward,” Burke said, “I realized that I would have to work very hard for everything I’d get.”

Ten years later, in 2006, tragedy struck again, with the death of his mother, Pam. Mrs. Burke, a well-respected, 30-year educator at Baltimore Highlands Elementary in Baltimore County, died of a rare form of breast cancer just eight months after her initial diagnosis.

“I had to quit my job and move back into my mom’s home to take care of her,” said Burke. “I was suddenly left with the burden of the whole family.”

Quickly, Burke became an instant father to a teenager who needed guidance and discipline, all while starting his own family and career.

“When fathers aren’t around, bad things can happen in this crazy world,” Burke said. “It takes a lot of responsibility, commitment and patience, but I wouldn’t have it any other way.”

Burke went on to say that while caring for his mother, he learned so much.

“I gained so much discipline and strength when my mom was sick. Somehow, I feel extremely lucky and never want to take life for granted.”

And now, as the owner of a construction company and with two young sons, Spencer and Ethan, and a third on the way, Burke also finds time to guide his brother, monitoring his academics, athletic training, household chores and now modes of transportation.

“Yes, Matt has his license now and has already blown out the clutch in one car and wrecked another,” Burke said with a smile. “I have become very good at multitasking, I can tell you that.”