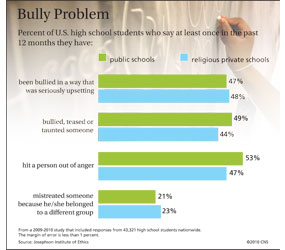 WASHINGTON – The widely publicized suicide of 18-year-old Tyler Clementi in September not only put the spotlight on the harassment of gay teenagers but also highlighted the possible role of religious groups in instilling negative views about homosexuals.

The 18-year-old freshman at Rutgers University jumped to his death from the George Washington Bridge in New Jersey a day after a video revealing his sexuality was streamed on the Internet by his roommate.

Clementi’s death and other recent teen suicides stemming from gay bullying have prompted finger-pointing about how this happened and ideas about how it could be prevented. Although religious groups have been blamed in part, many of them have been seeking ways to stop such discrimination.

Catholic Church teaching calls homosexual acts morally wrong but affirms the dignity of those with homosexual inclinations. The U.S. bishops specifically condemned “unjust discrimination” of homosexuals in their 1997 document “Always Our Children: A Pastoral Message to Parents of Homosexual Children and Suggestions for Pastoral Ministers.”

Jewish groups have been urging members to sign a pledge to end anti-gay bullying and the Church of Jesus Christ of Latter-day Saints, which opposes homosexuality, released a statement condemning gay bullying. Church leaders from various religious denominations also have been providing information for pastors and youth leaders about how to minister to teens struggling with their sexual identity.

But despite these efforts, church groups are still suspect in some of these teen suicides, according to a poll by Public Religion Research Institute in partnership with Religion News Service. The poll, released Oct. 21, showed 72 percent of Americans believe messages about homosexuality stemming from religious institutions contribute to negative views of gays and lesbians, and 65 percent see a connection between these views and the high rates of suicide among gay youths.

The group of 1,010 adults was polled by telephone Oct. 14-17. The survey has a margin of error of plus or minus 3 percentage points.

Christian churches, schools and organizations also get a bad rap in a new online project called “It Gets Better,” which features video clips of gay and lesbian adults who urge teens not to give in to despair. Many clips include stories of those who did not feeling welcome at church-sponsored programs.

In an Oct. 4 blog for America magazine, Jesuit Father James Martin wrote that Catholics can “do a better job in reaching out to young gays and lesbians,” but he also praised the bishops’ 1997 document and successful diocesan and archdiocesan programs for gay and lesbian Catholics.

He said the “voluminous writings of popes and theologians on human dignity all speak to the great gift that every person’s life represents.” He also stressed a “line often ignored” in the Catechism of the Catholic Church, which stresses that homosexual persons must be welcomed with “respect, sensitivity and compassion.”

The priest, who is a book author and cultural editor of the Jesuit magazine, described church traditions as “good places to start when it comes to outreach, especially with youth – and not just with gay and lesbian youth, but with all who feel excluded.”

He said the church’s pro-life stance should include “finding ways to protect all life, which also means preventing suicides,” including suicides by gay people.

At Jesuit-run Fairfield University in Connecticut, students planned to hold a Nov. 3 candlelight vigil to pray for acceptance and inclusion of gay and lesbian students.

Susan Birge, assistant vice president of student affairs and director of counseling and psychological services at the university, said students and school officials recognize that recent suicides are not just about harassment over sexual orientation but also how the Internet is used and how people treat one another overall.

Birge is particularly concerned about a recent finding by the University of Michigan Institute for Social Research showing that compared to college students of the late 1970s, students today are 40 percent less empathetic, with the steepest decline in empathy occurring in the past 10 years.

Researchers came up with the data by combining the results of 72 different studies of American college students conducted between 1979 and 2009.

Birge hopes students will be able to come up with ideas to reverse this trend. She said Fairfield University constantly urges students to take care of one another and to take care of the poor but said there is a disconnect if students can “be on Facebook and cause pain.”

Anna Mae Mayer, director of the Mercy Center for Spiritual Life at Salve Regina University in Newport, R.I., similarly said university officials viewed the Clementi suicide as part of a broader issue of how students can hurt or help one another.

The university, sponsored by the Sisters of Mercy, hosted a Nov. 2 gathering for students, faculty and staff called: “Our Human Dignity: A Forum in Response to the Tragic Death of Tyler Clementi at Rutgers University.”

The goal wasn’t to “rehash this but move forward in a positive way,” Mayer told CNS Oct. 28.

The federal government reached out to students with newly issued guidance about bullying. The 10-page letter, sent to the nation’s school officials Oct. 25 by the U.S. Department of Education’s Office of Civil Rights, spells out that certain types of harassment may violate civil rights.

Karen Ristau, president of the National Catholic Educational Association, agreed, saying this is a message she often stresses in talks around the country.

She said Catholic schools will “double up our efforts as well because (bullying) is unacceptable.”

On its website, NCEA stresses the importance of anti-bullying programs. It also states: “When one youth calls another youth a ‘queer’ deliberately intending it as a painful, prejudice slur, it is critical that school staff and student bystanders respond with more than, ‘Boys will be boys.’ Schools cannot tolerate such teasing, intimidation or prejudice.”