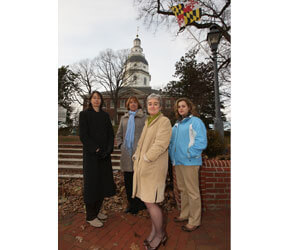 ANNAPOLIS – With the State of Maryland facing a projected budget deficit of $2 billion, money woes will likely dominate much of the 90-day session of the Maryland General Assembly that opens Jan. 13 in Annapolis.

As lawmakers look at budget cuts, the Maryland Catholic Conference is urging them to spare the social safety net. At the same time, MCC leaders are calling on the Legislature to preserve funding for a state textbook and technology loan program that benefits nonpublic school students.

Mary Ellen Russell, executive director of the legislative lobbying arm of the state’s Catholic bishops, said it will be important to remind lawmakers of the faith community’s “critical role” in providing social services at a time of increased demand and fewer dollars. Nonpublic schools similarly help the state, she said, by saving taxpayers more than $712 million in annual per-pupil expenditures.

“This is a time when the faith community and government need to work hand-in-hand,” said Russell, now entering her second year leading the Annapolis-based MCC.

While finances are shaping up to be the chief challenge of the session, the MCC may find an easier road promoting its agenda on other concerns. In an election year when lawmakers are not likely to take on controversial issues, Catholic leaders are optimistic the Legislature will avoid past battles like the proposed legalization of gay marriage. They also hope lawmakers will abandon previous attempts to expand the statute of limitations on child abuse civil suits – a move that has bankrupted other dioceses in states that have passed the measure.

Protecting the poor and vulnerable

“The budget reflects the state’s priorities,” Walsh said. “The highest priority should be assigned to preserving programs that help vulnerable Marylanders meet their most basic needs.”

Walsh noted that previous cuts have resulted in the elimination of the Maryland Medbank Program, which provided prescription drug assistance to low-income patients. Other programs in health and community services have also suffered.

Many programs provide such low levels of assistance that they are inadequate to meet people’s needs, Walsh said. She pointed to the Temporary Cash Assistance program that provides a monthly grant of just $684 for a family of four. The Temporary Disability Assistance Program provides just $185 a month to disabled adults who are not working or collecting unemployment or certain other benefits.

“Many of these kinds of programs have had cuts or years of flat funding,” she said. “They’re really not in a position to be cut again.”

With the U.S. Congress expected to take immigration reform, Walsh is not expecting much local legislation dealing with that issue.

Ellen Robertson, MCC associate director for education and family life, said she will once again push for the establishment of the BOAST (Building Opportunities for All Students and Teachers) tax credit. BOAST would give businesses a 75 percent state income tax credit in exchange for their donations to groups that provide scholarships for nonpublic school students and continuing education grants to nonpublic school teachers. Businesses would also be rewarded for donating to enrichment programs for public school students.

While Robertson believed she had the support to pass the long-sought credit last session, the measure was thwarted in the House Ways and Means Committee, where Committee Chair Del. Sheila Hixon of Montgomery County refused to allow it to come to a vote. Robertson encouraged Catholics to contact the committee and voice their support for the credit.

“We’re not going anywhere until we can get it out of the House committee,” she said.

Recognizing budget constraints, the MCC is not seeking any funding for BOAST, which has previously passed on the floor of the Senate. It merely wants the program enacted into law so that it can be operational when future funds are available.

The MCC is hopeful that Gov. Martin J. O’Malley will leave funding for the textbook and technology loan program at the current $4.4 million level. What he designates in his budget must be approved by the assembly, which may reduce or reject it.

“We’re asking legislators to maintain the level of whatever the governor introduces,” said Robertson, noting that the governor has until Jan. 20 to introduce his budget. “It’s the only funding we get from the state for our schools. We cannot lose it.”

Pro-life pregnancy centers were targeted last year when bills were introduced in Baltimore City and Montgomery County to impose restrictions that Catholic leaders believe were designed to discredit their work. The Baltimore measure was signed into law by Mayor Sheila Dixon, requiring pregnancy centers to post signs saying they do not provide abortions or contraception.

“We’re concerned the abortion lobby will put in a similar statewide bill,” said Nancy Paltell, MCC associate director respect for life. “We will be very aggressive to defeat it.”

As in previous sessions, the MCC will attempt to eliminate state funding for embryonic stem cell research.

Although the Legislature passed stringent restrictions on the death penalty last year, Russell said there may be attempts to weaken them this year. The MCC will oppose those efforts. It will also oppose any attempts to legalize same-sex marriage.

“There’s very little likelihood same-sex marriage legislation will get out of committee,” said Russell. “It’s still very important for Catholics to express where they stand on the issue. The overwhelming majority of the population wants to see traditional marriage maintained and recognized in our state.”

There are numerous opportunities for Catholics to get involved, Russell said. The MCC’s Catholic Advocacy Network provides online resources for learning about the issues and contacting lawmakers. Russell noted that the network has doubled in size from last year and now has participating parishioners from more than 100 parishes.

The MCC’s annual Lobby Night, held on President’s Day is expected to draw more than 650 Catholics from across the state, who will learn more about the issues and meet with their lawmakers.

Visit www.mdcathcon.org to register for Lobby Night or join the Advocacy Network.