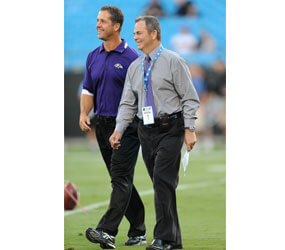 Kevin Byrne is one of the front office faces who have made the Baltimore Ravens a leading local institution over their 14 seasons here.

The senior vice president of public & community relations for the National Football League team, Byrne serves as their spokesman and oversees the content on BaltimoreRavens.com, which includes his insider’s blog, Byrne Identity.

“Kevin’s is one of the most demanding jobs in football team management,” Ravens owner Steve Bisciotti said. “He is one of the most respected media relations directors in the entire league. I have relied on his good judgment for over 10 years now.”

Byrne can tell plenty of tales, but whether it was an encounter with Pope John Paul II or his friendship with basketball legend Al McGuire, some of his best narratives reflect his membership in Alpha Sigma Nu, the National Jesuit Honor Society, rather than his more than three decades in the NFL.

Byrne, 60, is a graduate of Marquette University in Milwaukee.

Bryne went to work for the Cleveland Browns in 1981, and remained with the franchise when it relocated to Baltimore in 1996. He still carries the Cleveland influence, as he was educated in Catholic schools in and around the city on Lake Erie.

“My first two years of grade school at St. Teresa of Avila, it had an outhouse,” Byrne said. “Dealing with full winter gear and boots, you could make a full afternoon of that.”

It was no laughing matter when finances forced his family out of their home and him to a new high school. Byrne feared getting lost at the larger St. Edward, but Holy Cross Brother William Kleinyenberg steered him to the school newspaper and the wrestling mat.

“I was getting my head kicked in on the St. Edward’s football team,” Byrne said. “Brother William said ‘Go out for wrestling, fight people your own size.’ He got me writing about the football team.”

Byrne wrestled for four years at Marquette, and returned to his alma mater as its sports publicist. He had the enviable task of promoting McGuire, a motorcycle-riding maverick who came from similarly humble Irish Catholic roots.

In McGuire’s final game as a coach, Marquette won the 1977 national title. An analyst for NBC and then CBS, McGuire died two days before the Ravens won Super Bowl XXXV in January 2001.

“I don’t take a day off in season, but I went to see Al in a hospice,” Byrne said. “That was a powerful 45 minutes. He told me, ‘There is kindness around you every day. Pay attention to it, and be a part of it.’ That’s a lasting memory. Some coaches get so involved with minutia, they lose sight of the big picture.”

Byrne has worked in pro football since 1977, other than a two-year stint as director of public affairs for Trans World Airlines. It was in that capacity that he communicated several times with Pope John Paul II during his 1979 trip to the Midwest.

“I was on the papal jet from Des Moines to Chicago, turned a corner and there he was,” Bryne said. “I’m the guy who greets the pope with, ‘Hey, how you doing?’ He said ‘Good, thanks.’ He invoked that kind of response, he was so natural. You talk about someone emitting energy from their body …”

Byrne has rubbed elbows with charismatic people and worked media relations at 24 Super Bowls, while accepting the compromises inherent in his work. He and his wife, Sally, married in 1976, and he remembers some lonely road trips while she was home with four young children.

Shannon, their daughter, has a masters from Loyola University Maryland. Sean earned his undergraduate degree at Boston College; Tim and Conor, their youngest sons, went to Calvert Hall.

Pro football is often criticized for supplanting worship as an American Sunday ritual. Byrne said that “nothing brings a community together like a team,” but adds that under coach John Harbaugh, a parishioner of the Cathedral of Mary Our Queen in Homeland, the Ravens have chapel and Mass before all of their games.

“People are surprised at how important faith and religion are in the game,” Byrne said. “A team is like a family, they’re in this together.”