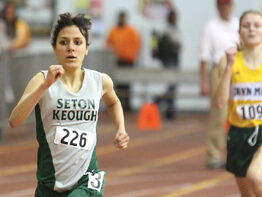 Throughout the evening, Seton Keough’s head indoor track and field coach Jim Lancaster stood 20 feet from the finish line and cheered for his team, event after event. He jumped, screamed and waved his arms as runners approached the finish line. He believed in his team the Seton Keough Gators.

The Gators had been ranked third all season long in the Metro Prep poll behind Western and top-ranked McDonogh School. He knew the short, six-week indoor season all boiled down to this one night as the Interscholastic Athletic Association of Maryland’s Indoor Track and Field championships took place Jan. 19 at Prince George’s Sports and Learning Complex, Landover.

As the 14 events began to unfold and starter guns sounded, Seton Keough began racking up the points. Just after 9 p.m., they held the IAAM Championship Bowl proudly, upending top-ranked McDonogh School with a score of 145 points to McDonogh’s second-place finish with a score of 129 points.

It was back-and-forth between the defending champion, McDonogh School, and the 2006 runner-up, Seton Keough. But the Gators were pumped up and remained consistent throughout the evening, led by outstanding performances from juniors Erin Brooks and Colleen Shea. Brooks alone tallied 36 points by placing first in the 55-meter dash with a time of 7.17 and first in the triple jump with a distance of 36-feet, 11 inches. Brooks then took second-place in the 300-meter dash (41.22) and second in the long jump (16-feet, 8 inches).

“Our track team had a phenomenal night,” said Lancaster. “I don’t think they could have run any better. Anything we have asked of them in preparation for tonight, they did. We pushed and pushed them, and they rose to the challenge. It was an amazing performance by our girls and I couldn’t be any prouder of them.”