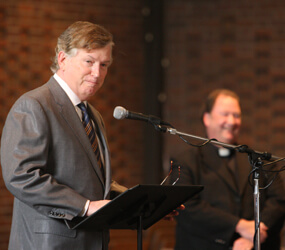 The future of the Archdiocese of Baltimore’s Catholic schools is in the hands of Frank Bramble.

It’s a heavy burden, but one the successful banking executive views as perhaps the most important of his lifetime.

Since Archbishop Edwin F. O’Brien appointed him chairman of the newly formed Blue Ribbon Committee on Schools planning in January, Bramble has seen four schools close their doors. His job is to stem the declining enrollment and tide of rising tuition, and start growing schools again.

“It’s terrible when these schools close, but it builds a further fire in my heart,” Bramble said in an interview with The Catholic Review.

Since he accepted the position, Bramble and Monsignor Robert L. Hartnett, the executive director for schools planning, have formed a committee of education, business and government leaders to devise a strategic plan for Catholic schools.

The group has been meeting about once a month since March, while remaining in constant contact through e-mail, phone calls and text messages. The archbishop said that he hopes the group will deliver the final longterm plan by May or June of 2010.

“As we move closer to the formulation of the plan, it will probably require that we have more meetings,” Bramble said.

Speculation about the process has been rampant since the committee was announced in February. Some thought a plan already had been formulated. Bramble, though, says the group has been investigating schools internally and externally to find a suitable path for Catholic schools.

Some have questioned if the process should be accelerated, given the financial challenges currently facing schools. Baltimore is not alone in its enrollment struggles, as dioceses around the country have shuttered schools.

“It’s not like it’s five years from now. In another year, we will be ready to move forward,” Bramble said of the urgency to produce an impending plan. “I think we have reason to be optimistic. I think if any archdiocese is going to reverse this trend, it’s going to be us.

“We understand the frustration that’s been going on. We’ve been closing schools for the last 10 years. I think it’s worth a little bit of paranoia, to be spending the next 10 years growing and opening schools.”

Bramble’s sentiments throughout the interview sounded much like Archbishop O’Brien’s in recent months. He wants schools that are as affordable for as many as possible.

“I think there will be some significant changes in how our schools look,” Bramble said. “We need to make sure that every child who wants a Catholic education has an opportunity to receive it in a reasonable location. We may decide in certain areas to consolidate schools into a larger facility.”

Bramble said that, in addition to consolidations, construction of new schools is almost assured.

“The financial aspect is going to be a tough one to crack,” Bramble said.

Many local businesses and governments might be called upon to take a vested interest in the future of Catholic schools in their community. Capital campaigns and annual funds will be key, he said.

Bramble added that perhaps the most important contributor to the equation will be the people of the archdiocese.

“We’re going to re-visit parishes and make it very clear to all parishes, whether they have a school or not, that they have a responsibility to children who attend our schools,” Bramble said.

The chairman of the blue ribbon committee is confident that when the plan formulation is complete, a solid execution will follow.

“Most fail at the implementation phase,” Bramble said. “When we go to potential investors with a plan, they’ll see it is based on detail and proper analysis. We’re going to talk about how we’re going to achieve a competitive advantage in the marketplace.”

He said the thousands of people who have been dedicated to Catholic schools will be rewarded for their sacrifices.

“We owe it to them to reverse this trend,” Bramble said. “They are the ones who understand better than any of us what our competitive advantage is – which is the faith formation that occurs throughout our schools, along with academic performance.

“I can assure you,” he added, “we’re ready to go with a marketing strategy that reflects that advantage. I can tell you this not only will be compelling, but it will create tremendous interest in our schools.”