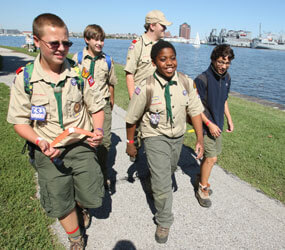 Fort McHenry, a historic American landmark, was once again the scene of a patriotic celebration.

The Boy Scouts of America celebrated their 100th anniversary Oct. 1-3 at the birthplace of the National Anthem. Well over 6,000 Scouts, volunteers and guests attended the three-day celebration.

As important as patriotism is to every Scout, faith also plays an important role in the organization. A Mass was held during the celebration that communicated the importance of God’s presence in the BSA.

Monsignor Phillips, pastor of St. Gabriel in Woodlawn, noted how the very first line of the Boy Scout oath mentions serving God. He prayed that the Scouts always remembered their ideals, and for all of them to make obeying the oath a part of their daily lives.

A former Scout himself, Monsignor Phillips is the chaplain of the Archdiocesan Catholic Committee on Scouting. The Christian faith, he said, offers another perspective on Scouting.

“There are elements of faith in Scouting,” Monsignor Phillips said. “To bring the archdiocese in it, we come at Scouting from another angle.”

Using that angle, Monsignor Phillips said, also resulted in Scouts expanding their minds and horizons about their faith. It allows Scouts to receive an even broader understanding and appreciation of God in their everyday lives.

“It’s important to show them God’s presence in all aspects of their lives,” he said. “They don’t just have to experience God in church. This makes a deep impression on them and is something they will carry in their lives, and then into their families’ lives.”

Joseph Simon, a member of the advisory board with the National Catholic Committee on Scouting could not have agreed more.

“Very few things make it to 100 years,” Simon said. “It’s a wonderful thing, especially when you add God to it. I’ve been in Scouting for 69 years and I thank God for every year of it. It’s been both beautiful and rewarding to my life.”

Fort McHenry became legendary when American troops used the area to successfully defend an attack by the British navy during the War of 1812. Watching the bombardment on a British truce ship, Francis Scott Key was inspired to write a poem when he saw the American flag still waving in the fort the following dawn. It eventually became “The Star-Spangled Banner.”

The celebration’s location was not lost on those in attendance.

“To celebrate the centennial at a historical place like Fort McHenry was great,” said Wendy Isett, a Scoutmaster from Catonsville who was there with her son. “They boys got an opportunity to experience many things they would not have gotten elsewhere. They got a hands-on experience with history.”