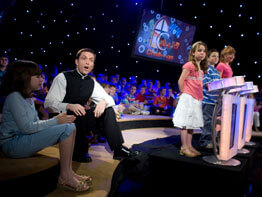 BOSTON – The boosters of a Boston religion TV game show think of it as being styled after “Jeopardy!” But in looking at the age of the contestants, it could well pass for an even younger version of “Are You Smarter Than a Fifth Grader?”

The program in question is “Wow!” Sometimes it goes by its full name – “Wow! The CatholicTV Challenge.”

It’s been produced for the past three years by CatholicTV, a television ministry of the Archdiocese of Boston founded more than 50 years ago.

In the half-hour show, three third-graders, usually from the same school, get to show off what they know about their Catholic faith.

Father Robert Reed, a Boston archdiocesan priest who is director of CatholicTV, devised “Wow!” and hosts it. He also stands ready to fill in the gaps in the contestants’ knowledge – and the viewers’ as well – with details on the issue at hand.

“Feedback was excellent, especially from parents,” said Chris Pham, a spokesman for the show, in an e-mail exchange with Catholic News Service. “The show is clean, educational and, unlike most parentally approved shows, kids actually want to watch the show.”

Mr. Pham noted, “One parent called – she was also a religious education teacher – and asked if she could have the questions from the show so that she could use them for her class. She wanted to set up a little ‘Wow!’ show in her classroom.”

The young contestants come to the studio with their teachers for a taping, generally all conducted over summer vacation. “The teachers typically are smiling and laughing when they leave,” Mr. Pham said. “They find it pleasing to show the kids that the faith can be fun and enjoyable.”

He added, “The children tend to take the competition very seriously. They spend hours in preparation at their schools.”

Father Reed himself has to write, on average, 70 questions plus answers and additional information for each show, which amounts to about 1,400 questions by the time a season’s worth of shows are taped.

Each show has a theme, such as the sacraments, saints or another Catholic category. The theme is introduced by an animated dog – voiced by Father Reed. Each show features three rounds of three students each. The winners of those rounds face off against each other in a final round. Each show’s winner gets prizes – typically, a set of DVDs.

About 50 installments of “Wow!” have been produced. Archived shows can be accessed online at www.catholictv.org/shows/default.aspx?seriesID=137.

In addition to “Wow,” CatholicTV’s lineup includes other family-friendly and educational shows as well as religious and news programming, according to a news release.

Programs are available online anytime but also can be seen on cable in selected areas in the U.S. and Canada and via Sky Angel IPTV, which is Internet protocol television that uses a broadband connection.