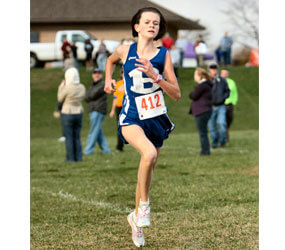 “She has an ability to come in without the background and experience of some of the other girls and be unafraid to go out hard,” said Cutsail, one of Zielinski’s running coaches at Boonsboro High School. “The first day I saw her (at tryouts), she was the youngest kid out there and here was this freshman leading everyone the whole way. She’s set some amazing times – with no training, just guts.”

So far this season, the parishioner of St. James in Boonsboro has run a 2-mile indoor race in 12:48 – just 18 seconds short of her school’s record. She ran a one-mile indoor race in 5:54 and a half mile in 2:50. At the Maryland State Cross Country Championships at Hereford High School in November, Zielinski finished 13th overall and first for a Washington County Class 1A girls competitor – finishing the challenging 3-mile course in 23:04.

Cutsail is convinced Zielienski “has it in her” to set a school record in the 2-miler as early as her sophomore year. She will also contend for other titles at the state level, he said.

“If she has a summer of training behind her,” Cutsail said, “she’s going to have great potential next year.”

Zielinski only began focusing on the sport a few years ago when she ran with her mother around her neighborhood and in a community program. She took to the sport immediately in high school.

“It’s fun, and I like being with people,” Zielinski said.

For longer events, Zielinski focuses on pacing herself.

“I wouldn’t call it my strategy,” she said. “I just call it smarter running because if you start really fast, then you burn out all your energy. But if you start slower and build up and pace yourself, you know how fast you can go, and in the last leg you can give it all you’ve got.”

Zielinski excels in the classroom, where she is on the honor roll. She plays the flute in the school band and for Masses at her parish. Cutsail called her a natural leader and someone who very well might become a team captain next year.

“When you see her after school or practice, she has four or five different book bags,” Cutsail said with a laugh. “She carries around more stuff than she weighs. She’s dedicated in sports and everything she does.”