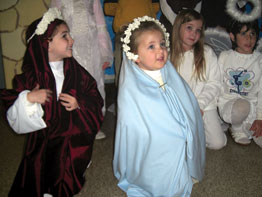 The saints came marching into Boonsboro Oct. 29 when 75 children – some wearing colorful flowing robes, angel wings or halos – paraded around town dressed as their favorite saints.

Singing “When the Saints Go Marching In” accompanied by a tuba, saxophones, a flute and other instruments, the young parishioners of St. James smiled as onlookers snapped photos or cheered them on.

After the short parade, the youngsters gathered in the parish hall, where they played games, read short essays about the saints, took home saint cards and enjoyed homemade “soul cakes” – sweet rolls similar to hot-cross buns that are an old November tradition.

Olivia Schmidt, an 8-year-old parishioner, wore a brown robe and a plastic garland of bright green, blue, red and yellow flowers that she made. She portrayed St. Cecilia, the patron saint of musicians and her favorite heavenly intercessor.

“I play the piano,” said Olivia, whose younger brother, Henry, dressed as St. Philip and their youngest sister, Maggie, was bedecked in pink as St. Margaret of Scotland. Olivia said it was important to tell people about the saints “because they are important people.”

While a few of the saints at the Boonsboro celebration sported somewhat anachronistic garb – “St. Patrick,” for example, wore a green shamrock necklace and a top hat instead of a bishop’s attire – the youngsters were enthusiastic about learning more about the saints.

The saints remind everyone that “all are called to holiness,” said Father Stephen Hook, pastor of St. James, a mission of St. Augustine in Williamsport.

“It’s not impossible for us to get to heaven,” he said. “We can use the saints as models.”
The saints parade, three days before the feast of All Saints, was a first for the small faith community in Washington County. Organizers said they plan a bigger one next year.