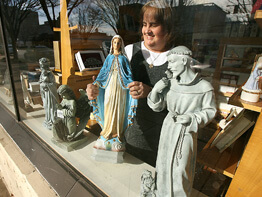 Dolores Orlando of Towson recently walked into the Catholic Corner Bookstore determined to find specific Christmas cards and a statue of St. Joseph, and looked relieved when she spotted the establishment’s owner, Joan Linz.

“Joan, I really need your help,” said Ms. Orlando, an Immaculate Conception, Towson, parishioner.
The bookshop keeper, a parishioner of St. Ursula in Parkville, assured her longtime customer a shipment of Christmas cards would be arriving later that evening and helped her select a St. Joseph statue for a friend.

This is the kind of help on which 50-year-old Ms. Linz thrives, and it is part of her store’s mission to provide fellow Catholics with the tools to become closer to God.

Ms. Linz and her husband, Tim Linz, residents of Lutherville, came up with the idea of opening a Catholic bookstore nearly a decade ago while traveling in Florida and noticing most of the churches had bookstores attached.

“We thought, ‘With all of the Catholics in Maryland, there must be a need,’” she said.

With the help of fellow St. Ursula parishioners Jim and Jeanette Flood of Lauraville, they launched their 700-square-foot Catholic retail store seven years ago on Alleghany Avenue, just off the traffic circle in the heart of Towson.

Mr. Linz kept his job with a Cockeysville construction company, and Ms. Linz and the Floods went about the day-to-day operations of their new venture.

The busiest day of the week tends to be Friday and the most traffic comes through the store in the spring, when people are looking for first Communion gifts, said Ms. Linz.

Though the two couples realized starting a new business was a risky venture, their deep Catholic faith helped them through the good years and the not-so-good years at the store.

However, they also discovered the profits could not sustain two families, and the Floods decided last year to leave the business.

“It was a hard decision for them to make, but one they needed to make in order to provide for their family,” Ms. Linz said. “We certainly understood. We need every bit of Tim’s salary.”

Though he continues to work his day job, Mr. Linz assists his wife with the operation of the store when he can.

She also gets help from their two daughters, one is in college and the other attends Mount de Sales Academy in Catonsville, and two volunteers, Jean Connor and Joan Ferris, both of Towson and parishioners of Immaculate Conception.

However, Ms. Linz’s dream is for the store to eventually make enough money to allow her husband to work with her full time.

“They really know their customers,” said Ms. Orlando, a customer since the store opened seven years ago. “They have the right kinds of gifts for the sacraments and holidays so we can express our Catholic faith.”

Ms. Linz believes God has helped them survive a few lean years at the store and a crisis two years ago when the landlord considered not renewing their lease in favor of a proposed delicatessen. The building’s owner eventually decided to renew their lease for another two years.

Saying she will continue operating the Catholic Corner Bookstore as long as it’s God’s will, Ms. Linz said the biggest profits earned in the store are in spiritual currency.

“To me, knowing how many people we’ve helped reach Jesus shows that we’ve had wonderful earnings,” she said. “Those are the kind of profits that enrich your soul.”