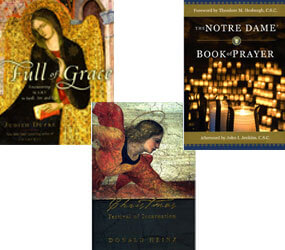 WASHINGTON – Here are some new books suitable for Christmas giving or with Christmas themes:

– “Revelation of the Magi: The Lost Tale of the Wise Men’s Journey to Bethlehem” by Brent Landau. HarperOne (San Francisco, 2010). 151 pp., $22.99. Translated into English from an eighth-century manuscript discovered after centuries in the Vatican Library, this book fills in details about the visit of the Wise Men to the site of Jesus’ birth, beyond the brief account contained in the Gospel of Matthew.

– “The Notre Dame Book of Prayer,” edited by Heidi Schlumpf, photographs by Matt Cashore. Ave Maria Press (Notre Dame, Ind., 2010). 301 pp., $27.95. With a foreword by Father Theodore Hesburgh and an afterword by Father John Jenkins, this collection of traditional and contemporary prayers relates each set of prayers to photographs of campus locations, including the Grotto and Notre Dame Stadium.

– “Blessed and Beautiful: Picturing the Saints” by Robert Kiely. Yale University Press (New Haven, Conn., 2010). 288 pp., $40. Written by a professor emeritus of English from Harvard, this book includes 130 color images of saints painted by Renaissance artists in Italy, along with meditations on the lives of more than a dozen saints, seen as real people rather than icons of perfection.

– “What I Keep: Photographs of the New Face of Homelessness and Poverty” by Susan Mullally. Baylor University Press (Waco, Texas, 2010). 93 pp., $34.95. These photographs, taken at the Church Under the Bridge beneath Interstate 35 in Waco, offer a portrait of 21st-century poverty by asking the homeless and formerly homeless what object they would never give up. The answers are touching and varied – a stuffed animal found in a dumpster, a 1945 penny to remember the year his mother was born, a great-grandmother’s “antique” 7UP bottle, a father’s watch or a musical washboard. This book might help children and adults alike change their perspective on Christmas “loot.”

–“Full of Grace: Encountering Mary in Faith, Art and Life” by Judith Dupre. Random House (New York, 2010). 332 pp., $40. In a series of stories and essays, illustrated by classic Renaissance portraits and contemporary images, Dupre takes a new look at Mary as mother and virgin, saint and peasant, and examines her artistic, cultural and historic influence – even as one of the central women in Islam. The author also visited the Holy Land and many of the great shrines of Marian pilgrimage to find Mary’s meaning in her own life.

– “Christmas: Festival of Incarnation” by Donald Heinz. Fortress Press (Minneapolis, 2010). 274 pp., $25. Heinz, a professor of religious studies at California State University in Chico, explores the social practices and broader cultural history of Christmas, as well as its theological meaning as the celebration of the incarnation of Jesus.

– “Hidden in the Rubble: A Haitian Pilgrimage to Compassion and Resurrection” by Gerard Thomas Straub. Orbis Books (Maryknoll, N.Y., 2010). 170 pp., $18. As the first anniversary of the January 2010 earthquake in Haiti approaches, author, filmmaker and photographer Straub uses words and images to capture the realities of the poor – both their sufferings and their spirit – in the poorest country in the Western Hemisphere.

– “A Christmas Carol” by Charles Dickens; edited by Gregory F. Augustine Pierce. Acta Publications (Chicago, 2010). 142 pp., $14.95. This newly designed version of the 167-year-old classic about the miserly Ebenezer Scrooge presents Dickens’ original text and the four-color artwork from an early 20th-century edition of the book. As a new introduction by theologian John Shea notes, “There is something universal in what Scrooge is undergoing; and his adventure is inviting us – no, pulling us – into an evaluation of our own life. We begin to see ourselves in the mirror of Scrooge.”

– “A Maryknoll Book of Inspiration: Readings for Every Day of the Year,” edited by Michael Leach and Doris Goodnough. Orbis Books (Maryknoll, N.Y., 2010). 401 pp., $25. With brief passages written by Catholic figures that include Father Henri Nouwen, Flannery O’Connor, Dorothy Day, Blessed Teresa of Calcutta and many others, this book provides a way to both focus each day in prayer and to expand the reader’s horizon to worldwide concerns and the universality of the church.

– “Sacred Passion: The Art of William Schickel,” second edition, by Gregory Wolfe. University of Notre Dame Press (Notre Dame, Ind., 2010). 218 pp., $75. This beautiful coffee-table book features the artwork and life story of Schickel (1919-2009), a sculptor, architectural designer, stained-glass artist and painter whose works include the renovation of Gethsemani Abbey in Kentucky, the “Rotunda of Creation” in the Cincinnati Center for Health and Wellness, the “Journeying With Christ” mural in St. John Neumann Church in Canton, Ohio, and the “Living Water” sculptural fountain in the Grotto at the University of Notre Dame, completed when Schickel was still a student there.

– “A Franciscan Christmas” by Kathleen M. Carroll. St. Anthony Messenger Press (Cincinnati, 2010). 120 pp., $12.99. With short chapters on various people and elements important to the story of Christ’s birth, this slim volume looks at each piece of the Nativity through its meaning in Franciscan history and Christian spirituality.