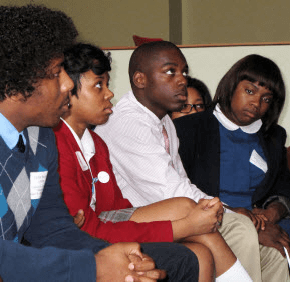 BROOKLANDVILLE – Children learn to stop, drop and roll if there is a fire. Jasmine Brown said the same type of action plan should be developed for cyber-bullying.

“We need to have a stop, drop and roll for cyber bullying,” said Brown, a Maryvale Preparatory School sophomore. “People won’t do anything until (someone commits suicide), and I think that’s sad.”

Nearly 60 students from the four schools participated in an open dialogue about disabilities, depression and drug awareness, gender stereotypes and cyber bullying.

“With topics so far spread as these,” Brown said, “you’re not going to solve bullying (today). Rome wasn’t built in a day. We can be a bully and we can choose to stop it.”

“What we talked about is what we can do to lessen the burden a little and try to prevent it,” Brown said. “You can’t prevent someone’s actions. What you can do is not support the (bully’s) actions.”

Students heard five speakers discuss these topics, including a middle school teacher from Gilman; a sergeant from the Anne Arundel County Police Department; and a psychiatrist from Sheppard Pratt.

In September, Maryvale students formed a diversity club, which turned its focus to the conference. Students and a faculty representative from the four schools planned the conference.

Natalie Papaeracleous, an NDP senior, said during a discussion on cyber bullying she learned that boys tend to focus on violence, while girls typically make it a popularity contest.

“We learned how serious it can get,” said Papaeracleous, 17.

Harris said several boys expressed the pressure they feel to pay the bill when they’re on a date.

“The girls were saying women don’t always want you to pay,” said Harris, 17. “That was an eye opener.”

Students are charged with disseminating the information to their peers. The schools have not yet developed a plan for how to share the information, but have suggested peer mentoring groups and school-wide assemblies as possible avenues.

Denny Grace, a Calvert Hall junior, said his school’s peer mentoring program may be a way to reach students.

Bernie Bowers, the director of diversity at Loyola Blakefield, said students at the conference learned that diversity goes beyond ethnicity to include gender, people with disabilities and academic abilities.

“The first thing you think of is black and white,” Bowers said. “It’s much broader.”

Bowers, who wants students to reflect on what they learned, said “the reflection process is very key.”

“I think each of these kids got something out of it, which is paramount,” Bowers said.

Carol Malone, a Maryvale English teacher and the conference coordinator, said students are “better informed after today,” knowledge she wants them to apply to their daily lives.

The second annual conference will likely be held next spring, Malone said.