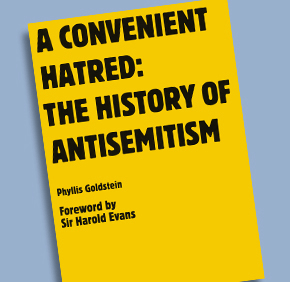 Phyllis Goldstein’s “A Convenient Hatred” is a major work of history that illuminates perhaps the most persistent and tragic source of hatred and violence in the history of Western civilization. It has behind it the resources of a major international research and educational organization, Facing History and Ourselves. A substantive foreword is provided by Sir Harold Evans, head of the Reuters news agency.

Goldstein aims for and achieves an admirable objectivity, which makes the study accessible for readers of all faiths and backgrounds. She begins in the centuries before the rise of Christianity, with anti-Jewish canards in ancient Greek and Roman literature stemming from the Jews’ refusal to worship pagan gods (and the Roman emperor as a god) and their persistent revolts against Greek and Roman domination, revolts which ended only with their decisive defeat in the second century of the Common Era.

As the church gradually separated from the synagogue during the patristic period, Christians, most notoriously St. John Chrysostum, picked up the nergative stereotypes of Jews common in ancient literature, adding to them the notorious “deicide” charge – the absurd notion that Jews were collectively guilty for the death of Jesus. This despite the fact that, as the Gospels record, only a few Jews, mainly the chief priest of the temple, were actually involved and the fact that Jesus’ crucifixion was extremely unpopular in Jerusalem, and unknown to most Jews in the then-known world until centuries later.

Goldstein misses, at this point, the true significance of the writings of St. Augustine on the Jews. While presuming the deicide charge, Augustine also noted that Jews give witness to the validity of their Scriptures (which Christians called the “Old Testament” although its message about the One God of Israel is ever new and challenging), without which the message of the “good news” of the New Testament makes little sense. Goldstein also misses the significance of the fact that the popes adopted Augustine’s protective view of Judaism so that it alone among all the religions of the ancient world survived.

Goldstein provides the invaluable larger context, historically, in which these can be understood. That larger context was increasingly grim for Jews as the centuries progressed, especially after the First Crusade in which thousands of Jews were murdered, and the institution of ghettos, forced conversion, the blood libel and violation of the Eucharist charges, pogroms, and expulsion from all of the nations of Western Europe save for the Italian peninsula, where papal protection prevailed.

Goldstein rightly spends a good percentage of her time on the events leading up to the Holocaust in Europe and on increasing anti-Semitism in the Arab/Muslim world today. The latter began before the existence of the state of Israel and independently of Zionism.

She concludes with a call to Jews, Muslims and Christians alike to view each other with mutual respect, citing Elie Wiesel that “although we today are not responsible for the injustices of the past, we are responsible for the way we remember the past and what we do with that past.” The volume includes helpful illustrations and bibliography.

Fisher is distinguished professor of Catholic-Jewish studies at St. Leo University in Florida.