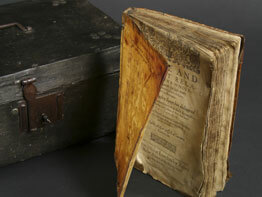 LONDON – A book bound in the skin of an executed Jesuit priest was to be auctioned in England.

The macabre, 17th-century book tells the story of the 1605 Gunpowder Plot and is covered in the hide of Father Henry Garnet.

The priest, at the time the head of the Jesuits in England, was executed May 3, 1606, outside St. Paul’s Cathedral in London for his alleged role in a Catholic plot to detonate 36 barrels of gunpowder beneath the British Parliament, an act that would have killed the Protestant King James I and other government leaders.

The book, “A True and Perfect Relation of the Whole Proceedings Against the Late Most Barbarous Traitors, Garnet a Jesuit and His Confederates,” contains accounts of speeches and evidence from the trials. It measures about 6 inches by 4 inches, comes in a wooden box and will be auctioned Dec. 2 by Wilkinson’s Auctioneers in Doncaster, England.

Sid Wilkinson, the auctioneer, said: “The front cover is rather spooky because where the skin has mottled or crinkled there looks to be a bearded face.

“It is a curious thing, and we believe it to be taken from the skin of Henry Garnet,” he told Catholic News Service in a telephone interview Nov. 28.

He added that it was common for the skins of executed criminals to be used to cover books about their lives, a process called anthropodermic binding.

“These things exist in history and they exist in museums as well,” Mr. Wilkinson said. “This one has caught people’s interest because they don’t appear on the market very often.

“We have been in business a long time and, although we deal mostly in furniture, I have never seen anything like it,” he said.

Mr. Wilkinson said the owner was an academic but declined to name him.

He said the book might be auctioned for hundreds or thousands of British pounds, but added: “It may not even sell. It is quite macabre and not to everyone’s taste.”

The book was made by Robert Barker, the king’s printer, just months after Father Garnet’s execution for his alleged involvement in a plot instigated after the king reneged on his promises to end the persecution of Catholics.

Father Garnet had been acquainted with the plotters and had heard their confessions but he always insisted he strongly opposed their designs and tried to stop them. He was convicted of treason and was sentenced to be hanged, drawn and quartered.

Father Garnet went to his death pleading his innocence. Members of the crowd prevented the executioner from cutting him down from the scaffold until he was dead. Others pulled on his legs to hasten his end so that he would not have to endure the ensuing horrors.

Father Garnet is not among the English martyrs of the Protestant Reformation who have been canonized or beatified.