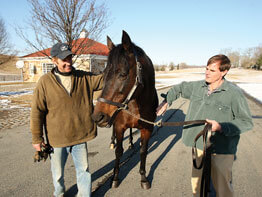 The best ones you fall in love with, said thoroughbred trainer Kevin Boniface, 42, as one of his favorite animals nudged him against the neck inside the chilly stall.

Cadre, a massive, muscular 3-year-old in training, “is going to win the Preakness this year,” said Mr. Boniface as he continued to horse around with the animal. “You heard it here first.”

His brother Billy Boniface, 44, stood just outside the stall, warmed on a brisk winter morning in thick tan overalls for his work as a breeder on the internationally known Bonita Farm.

“Horse is in our souls,” said Kevin Boniface. In fact, it is steeped into the souls of the entire Boniface clan. Seven family members are on staff at their thoroughbred breeding and training facility in Harford County’s Darlington.

For five generations, the Bonifaces have thrived in the horse racing industry, beginning with the boys’ great-grandfather, Fritz Boniface, who they said once ran a stagecoach across England.

Bonita Farm is even known in Triple Crown circles, as Deputed Testamony won the Preakness in 1983.

“It put us on the map,” Billy Boniface said, “increased our exposure and clientele.”

With 35,000 thoroughbreds born every year in the United States, chances are slim to train one to run the Triple Crown, let alone win one of its legs. The goal of every racehorse owner and trainer, however, is to get to the track, said the Boniface brothers.

Horse racing in Maryland is a $5.2 billion industry.

Unique is Bonita Farm’s start-to-finish one-stop facility, “a place where a horseman can board a mare, have a yearling broken, train that yearling to be a racehorse, and then retire the horse after its racing career is over,” said J. William Boniface, general manager, and father of five Boniface children who grew up in the parish of St. Margaret, Bel Air.

Anyone taking a spin around the spacious property who cared to count the number of horses in pastures and stalls would find 160. In a premier space inside the stallion barn is Deputed Testamony, the aforementioned Preakness winner, now 29 years old and fuzzy as a llama because of a disease which prevents shedding.

The Boniface brothers said they were born into their careers – no college required.

“I went to Bonita Farm University,” joked Kevin Boniface, an alumnus of The John Carroll School in Bel Air, as is his brother. Between them they are raising six more John Carroll students and alumni, and one not yet there is a seventh-grader at St. Joan of Arc School.

The former altar boys share the attitude that their “good Catholic education” caused them to send their children to Catholic schools and encourages them to go out into the world to develop their souls.

“When you deal with the clientele we do,” said Billy Boniface of a list that includes movie stars and senators, “you have to handle yourselves. Catholic school made me a better person. It taught me morality and how to treat others. The client is always first.”

Yet preparing the horses to compete physically and psychologically is as important to Kevin Boniface, who opposed his brother’s thought.