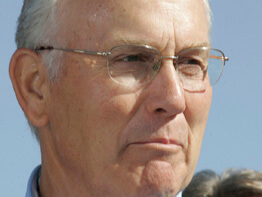 BOISE, Idaho – Bishop Michael P. Driscoll of Boise urged Idahoans to pray and support Sen. Larry Craig and his family Sept. 1, hours after the senator announced that he was resigning his post.
“Seeing his family and friends behind him, I could not help but feel compassion for this man who has served the state well for 27 years in Congress and six years in the state Legislature. This must have been the most difficult decision of his professional career and I can’t imagine the impact it must have on his family,” said Bishop Driscoll.
Craig’s resignation ended a week marked by escalating pressure that followed published reports of a guilty plea resulting from an arrest in a Minneapolis airport months ago.
At a press conference at the historic Boise Depot, Craig, surrounded by family and friends, announced that he would resign his Senate seat effective Sept. 30.
The bishop said he watched the press conference on television “with sadness and regret. … I have known the senator since I came to Idaho (in 1999), and I have found him to be patient and willing to work with us on behalf of immigrants and those most in need in our state.”
Bishop Driscoll asked “Catholics and all Idahoans to offer their prayers and best wishes to the Craigs as they face the changes and challenges of the coming weeks and months.”
“As people of faith, we are taught to reach out with concern, receive with compassion and renew with conviction that when we are all at the table we can build a better world,” he added.
Idaho Gov. C.L. “Butch” Otter is charged with naming a successor to fill the remaining 15 months of Craig’s term.
“We ask the Holy Spirit to guide Gov. Otter and all those in power to help them choose wisely and refocus our attention toward helping the poor and least among us,” the bishop said.