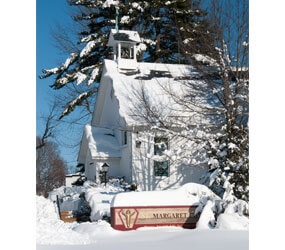 The one-two punch of back-to-back blizzards is leaving parishes and schools throughout the Archdiocese of Baltimore scrambling to adjust schedules and meet the needs of snow-bound parishioners.

At the same time, pastors are worried about unexpected snow-removal expenses compounded by a second weekend of lost collections.

Maryland was walloped by a record-setting blizzard that dumped more than 30 inches of snow across portions of the region Feb. 5-6. The storm came more than two months after an earlier blizzard left 21 inches of snow on the ground.

A third storm that was expected to bring another foot of snow on Feb. 10 was forecast as The Catholic Review went to press.

As the most recent blizzard struck, Archbishop Edwin F. O’Brien issued a statement reminding Catholics that church law excuses them from fulfilling the Sunday obligation to attend Mass when there is “a grave cause such as unsafe travel due to severe weather conditions.” He urged them to listen to the radio Mass or televised Mass on EWTN.

Pastors throughout the region cancelled all or many of their weekend Masses and major events were postponed – including a Feb. 7 archdiocesan event at Calvert Hall College High School in Towson that had been planned to honor women and men religious.

The roof at Immaculate Heart of Mary School in Baynesville suffered damage when a large tree limb fell during the blizzard. Melting snow began leaking into a classroom and the school was using large trash cans to contain the water until the damage could be repaired – a difficult process because of the massive snow accumulations.

At Ss. Peter and Paul in Cumberland, Capuchin Franciscan Father James Kurtz noted that only five people were able to attend the 4:30 p.m. Saturday Mass and nearly 90 people total attended the two Sunday Masses. Masses at St. Ambrose in Cresaptown were canceled because of difficulty clearing the parking lot – the first time in the parish’s history that Sunday Masses were not celebrated.

At the Church of the Immaculate Conception in Towson, Father Michael J. Foppiano reported that attendance was just 200 at three Sunday Masses – down from a normal weekend attendance of about 2,300.

Several pastors said the lost revenue in collections is having a serious impact on parish finances. Father Robert DiMattei, pastor of St. Athanasius in Curtis Bay and St. Rose of Lima in Brooklyn, said the snows have been “devastating.”

“When we don’t have our people in the pews, our whole parish, and what it takes to operate our church household, suffers,” he said. “Many of our fundraising opportunities have also been canceled and we are attempting to reschedule these events.”

The pastor said he depends on the faithfulness of parishioners to make up their stewardship when they return to church or mail in their regular offerings.

Father DiMattei noted that snow removal is very expensive. He, like Father Kurtz in Cumberland and other priests throughout the archdiocese, helped with shoveling.

“On Sunday, God sent me four angels, young men who came by looking for a way to make some extra money shoveling snow,” he said. “This is the first time this has happened in my years as a pastor.”

Father Brian Rafferty, pastor of Our Lady of the Chesapeake in Lake Shore, was planning to publish an appeal in the parish bulletin to make up for the lost collection.

“The fact is that we are hurting financially, badly!” he wrote.
The pastor said making payroll has become a “serious challenge.”

“You know I am not exaggerating,” he wrote, “so please make up for any envelopes missed. The need is real.”

Jesuit Father William J. Watters, pastor of St. Ignatius in Baltimore, said he will work with the parish’s finance committee and pastoral council to deal with the financial challenges posed by the snow.

“I suspect we eventually will do some second collections to regain the lost offertory monies,” said Father Watters, noting that his parish was successful in offering its weekly radio Mass despite the snow.

The blizzard failed to stop a very special Feb. 7 celebration at St. Andrew by the Bay in Annapolis, where Father Martin Burnham received Jeremy Tate into full communion with the Catholic Church during the 11:30 a.m. Mass.

Tate, who had formerly studied to become a pastor in the Evangelical Presbyterian Church, was joined by family and friends – some of whom walked more than two miles in the snow to be at the celebration.

“In the course of his studies, Jeremy came to believe that all the things that he argued about against the Catholic faith were no longer valid,” said Father Burnham, pastor, “and he saw the faith of the Catholic Church as something to which he was being called.”

Father Burnham reported that nearly everyone in the contemporary music group made it to the Mass.

“The only sad part was that his parents, who live in New Orleans, were not able to fly in for the celebration,” Father Burnham said. “Since this celebration had already been canceled once due to snow, Jeremy was determined not to let this happen again.”

Dr. Ronald J. Valenti, superintendent for Catholic schools, said no school in the archdiocese was open Feb. 8, two days after the snowstorm ended. Counties across the state closed.

A storm predicted for Feb. 9 and 10 was expected to compound the problem of blocked, unplowed streets for cars and buses.

Normally, schools follow the announcements of their public school counterparts. Still, Dr. Valenti said each Catholic school principal is given “the local decision about whether the schools will be open or closed.”

Parting with a county decision is rare, however.

The archdiocese requires that every school have 175 “instructional days.” Each principal has to build in “snow days” and if they go over the amount allotted, they have to make up those days.

“Sometimes, they’re made up during the Easter break, sometimes they’re made up by not taking any other holidays the rest of the year,” Dr. Valenti said. “In some cases, they’ll have to make up the days at the end of the school year.”

As a former principal, Dr. Valenti said he learned about being flexible during snowstorms. The recent snow impacted his participation in a six-diocese conference, which was canceled after a year of planning.

“You have to be adaptable and flexible, but sometimes it does cause havoc,” Dr. Valenti said. “You just have to go with the flow and make the best of it.”

Matt Palmer contributed to this article.