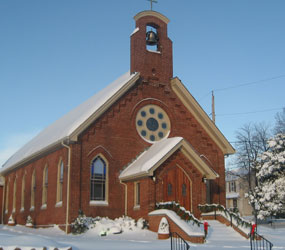 It was a first in Monsignor James M. Barker’s 29 years of priesthood. When he showed up for 5:30 p.m. Mass Dec.19 at St. Ignatius in Hickory, the pastor was the only one there.

It wasn’t anything he did. People stayed home after getting buried in more than 21 inches of snow that fell on the Baltimore metropolitan area Dec. 18-19.

Archbishop Edwin F. O’Brien issued a Dec. 19 news release reminding Catholics that church law excuses them from fulfilling the Sunday obligation to attend Mass when there is “a grave cause such as unsafe travel due to severe weather conditions.” He encouraged those who couldn’t attend Mass to listen to the Sunday Radio Mass on WBAL-AM or watch the TV Mass on EWTN.

Many parishes canceled one or more of their Masses and Catholic schools throughout the area shut their doors. Pastors used e-mail, phone messages on parish answering machines, media alerts and blurbs on their Facebook pages to get the word out about canceled Masses.

Saturday Masses were especially low in attendance as people shoveled their way out of the record-setting snowfall – the biggest for the month of December since records began to be kept in the 19th century.

“I heard one confession and said Mass for two people on Saturday night,” said Father Michael Foppiano, associate pastor of Church of the Immaculate Conception in Towson. “It was quite the experience in a huge church with three people as a blizzard blew outside.”

Despite the harsh weather, Our Daily Bread Employment Center in Baltimore kept its doors open.

On a typical day, the Catholic Charities’ outreach center serves a hot lunch for up to 600 people. On Dec. 19, 300 showed up for chicken and rice casseroles; Our Daily Bread also provided emergency lunches for the Code Blue Shelter on Guilford Avenue.

Aaron Kennedy, volunteer coordinator for Our Daily Bread, said 19 volunteers made it to the center during the blizzard – down from the normal 60. Thirteen parishioners of Our Lady of Pompeii in Highlandtown, including 11 high school students, were among those who braved the storm to serve food to the hungry. So was William McCarthy, Catholic Charities’ executive director.

“There will be hungry people showing up at our doors regardless of the weather or any other situation,” said Kennedy, noting that Our Daily Bread has been in continuous daily operation since it opened in 1981. “We’re here for them. It’s a statement that as long as there are people in need, we are going to be here addressing those needs.”

Making sure the radio Mass hit the airwaves after the blizzard was a top priority for Jesuit Father William J. Watters. The priest is pastor of St. Ignatius in Baltimore, the parish that hosts the weekly radio Mass.

“The real challenge was to make sure that we had a backup plan to guarantee that we would be able to go on WBAL live without the usual engineer who handles this task each Sunday,” Father Watters said.

Kevin Capinpin, a parishioner who lives nearby, went through a one-hour training session on Dec. 19 by way of a phone hookup to learn how to connect the parish control room with WBAL. Capinpin’s newfound skills weren’t needed, however, as Joseph Lam Yau, the normal engineer, was able to get to St. Ignatius on Sunday morning.