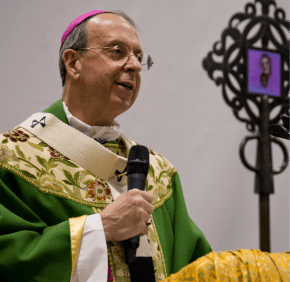 By Kyle Taylor
Special to the Review
Archbishop William E. Lori said it would be impossible for the Archdiocese of Baltimore to celebrate its 225th anniversary without mention of its prominent black Catholic history.
That legacy was on display Nov. 16 at St. Frances Academy, where more than 300 people viewed documents and memorabilia culled from the archives of the archdiocese, St. Mary’s Seminary and University, the Oblate Sisters of Providence, the Society of St. Joseph (the Josephites) and the Archdiocese of Philadelphia.
Some of the items will remain on display over the coming year at St. Frances Academy.
Artifacts on view Nov. 16, in the middle of Black Catholic History Month, included the diary of Josephite Father Charles Uncles, the first African-American ordained to the Catholic priesthood in the U.S.; a rare, 15-decade rosary worn by the Oblate Sisters until 1967; and one of the bonnets the members of their order wore when it was founded in 1829.
Archbishop Lori presided at a special Mass to celebrate the exhibit, and in his homily stressed paying homage to black Catholic contributors.
“How important,” he said, “that we give thanks to the Lord for the example of courageous and persistent faith they left for us, and give thanks to God for the path of freedom they cleared for us, and for the opportunities their sacrifices have made possible. And how important that we not only remember and give thanks, but also that we pray to follow in their footsteps.”
Archbishop Lori urged the crowd to follow the example of Mother Mary Lange, foundress of the Oblate Sisters of Providence and what would become St. Frances Academy, the first Catholic school for black children in the U.S.
“Mother Lange was a visionary and a pioneer in terms of meeting needs of the African-American community around her,” Archbishop Lori said. “With her in the lead, she started ministry that continues to enrich the church to this day.”
Archbishop Lori cited an exhaustive list of accomplishments that took place in Baltimore, including St. Francis Xavier Parish being the first black parish in the U.S.; the founding of the Josephite fathers and brothers; and the legacy of St. Peter Claver Parish, once the largest black Catholic community in
the country.
“We have a proud and beautiful heritage,” he said afterwards. “You remember your heritage so you can embrace the future.”
Doing that by using and investing in talent already in the church is a key way of following in the footsteps of leaders such as Mother Lange, Archbishop Lori said. It is also important for the church moving forward.
“It is essential for all of us to use our gifts and talents – the faith is enriched when we express our gifts and backgrounds,” Archbishop Lori said. “It’s part of what it means to be Catholic. The church fulfills its mission when believing Catholics use their gifts for the good of the church, whatever those gifts may be.”
Also see:
Re-gifting: Vatican raffles pope gifts for charity
Diabetes doesn’t make life easy, Baltimore longshoreman says
PrevNext