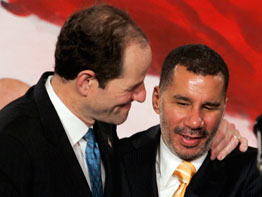 ALBANY, N.Y. – The head of the New York State Catholic Conference in Albany, on behalf of the conference and the state’s Catholic bishops, assured New York’s new governor of prayers as he “assumes his awesome responsibilities under extraordinarily difficult circumstances.”

“I look forward to working closely with Gov. (David) Paterson and the Legislature on behalf of the common good” of the state, said Richard E. Barnes, the conference’s executive director, in a March 12 statement.

Paterson, the state’s lieutenant governor, was to be sworn in as governor March 17 to succeed Gov. Eliot Spitzer, who announced his resignation March 12 in the wake of a prostitution-ring scandal.

Barnes described Paterson as “highly intelligent, well versed on the issues and extremely affable.” He noted that they have not always agreed, but said that Paterson has been respectful of the state’s Catholic conference “in our role as advocates for the most vulnerable members of society.”

Barnes also said Paterson has “an appreciation for the role of the Catholic Church, which is the largest nongovernmental provider of health care, human services and education in New York state, and for the perspective we bring to the public policy arena.”

On March 10, the day news reports broke the scandal about Spitzer, the governor had been scheduled to meet privately with New York Cardinal Edward M. Egan and other Catholic bishops in the state to discuss abortion legislation, education tax credits and other issues.

Dennis Poust, communications director for the New York State Catholic Conference, said Cardinal Egan’s office received a call that the governor had a scheduling conflict and probably wouldn’t be able to meet with him or the state’s bishops that day. Later, the cardinal received word that instead of Spitzer, the lieutenant governor would meet with them, but eventually that meeting also was canceled.

The next day, as part of the Catholic conference’s annual Public Policy Day, the cardinal celebrated Mass at the convention center attached to the statehouse and New York Catholics met with their state representatives to discuss a variety of issues.

Bishop Nicholas DiMarzio of Brooklyn had described the proposed legislation as a “radical abortion bill” that would legalize partial-birth abortion.

In a Feb. 7 talk in Brooklyn, the bishop said the measure would “disenfranchise parents of their right to play a central role in the most significant decisions of their minor children” because it prohibits parental notification, and it would also expand access to over-the-counter pharmaceuticals “that destroy human life.”

The bill proposed to eliminate even modest controls on legal abortion and possibly force physicians and hospitals – including Catholic hospitals – to perform abortions, said Kathleen Gallagher, director of pro-life activities for the New York State Catholic Conference. The bill could also potentially be used to force employers and health insurance plans to pay for abortion, she said.

Poust told Catholic News Service March 13 that the abortion bill “is not dead but it has lost it’s main advocate” in the former New York governor. He said the measure was personal for Spitzer because of his “abortion advocacy and activism.”

News reports indicate Paterson, who is considered more liberal than Spitzer, supports the bill, but whether or not he will push it remains a question, Poust said.