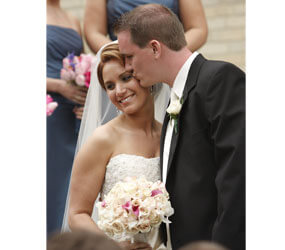 Despite the concern voiced by some bishops about the document’s pastoral tone and content, the U.S. Conference of Catholic Bishops approved a pastoral letter on marriage Nov. 17.

Nearly 100 changes in two rounds of amendments preceded the 180-45 vote in favor of “Marriage: Love and Life in the Divine Plan” during the bishops’ fall general assembly in Baltimore.

Two-thirds of the USCCB membership, or 175 votes, was required for passage. There were three abstentions.

An effort by retired Archbishop Francis T. Hurley of Anchorage, Alaska, to remand the document to the Committee on Laity, Marriage, Family Life and Youth for rewriting failed 56-169, with three abstentions.

Archbishop Hurley said he had “nothing to offer in terms of changing a line here and there” but wanted to see the pastoral letter expanded in some areas, switched around in sections and rewritten to incorporate parts of “Caritas in Veritate” (“Charity in Truth”), Pope Benedict XVI’s recent encyclical.

But Archbishop Joseph E. Kurtz of Louisville, Ky., chairman of the subcommittee that drafted the letter on marriage, strongly opposed the move, calling the document “worthy of giving us direction for the next three years.”

A key change made in the letter during the amendment process was the rewriting of language describing both cohabitation and contraception as “intrinsically evil.”

Instead, it calls contraceptive practices “objectively wrong” and “essentially opposed to God’s plan for marriage and proper human development.”

The document encourages the use of natural family planning, which the bishops say promotes “an attitude of respect and wonder … and fosters the true intimacy that only such respect can bring.”

In place of a section that said living together without marriage “is intrinsically evil and thus always diminishes the capacity for love,” the amended document quotes the Catechism of the Catholic Church in saying, “Cohabitation ‘involves the serious sin of fornication. It does not conform to God’s plan for marriage and is always wrong and objectively sinful.’“

The pastoral letter also names divorce and same-sex unions as two other “fundamental challenges to the nature and purpose of marriage.”

The bishops say divorce conflicts with “God’s plan for marriage,” but the bishops added that in some cases, “divorce may be the only solution to a morally unacceptable situation,” such as when the safety of a spouse or children is at risk.”

They also encourage those who have divorced and remarried civilly to “participate in parish life and attend the Sunday Eucharist, even though they cannot ordinarily receive holy Communion.”

To couples facing “modern stresses upon marriage,” such as “the conflict between work and home, economic hardships and social expectations,” the bishops urge them to “turn to the Lord for help” and to utilize church programs and ministries “that can help save marriages, even those in serious difficulty.”

The moves to legally recognize same-sex unions pose “a multifaceted threat to the very fabric of society, striking at the source from which society and culture come and which they are meant to serve,” the bishops say.

“Such recognition affects all people, married and nonmarried: not only at the fundamental levels of the good of the spouses, the good of children, the intrinsic dignity of every human person and the common good, but also at the levels of education, cultural imagination and influence, and religious freedom,” they add.

To oppose the legal recognition of same-sex unions is not discriminatory nor a matter of fairness, the bishops say.

“To promote and protect marriage as the union of one man and one woman is itself a matter of justice,” the document says. “In fact, it would be a grave injustice if the state ignored the unique and proper place of husbands and wives, the place of mothers and fathers and the rights of children, who deserve from society clear guidance as they grow to sexual maturity.”

“The vision of married life and love that we have presented in this pastoral letter is meant to be a foundation and reference point for the many works of evangelization, catechesis, pastoral care, education and advocacy carried on in our dioceses, parishes, schools, agencies, movements and programs,” says the document’s closing section, called a “commitment to ministry.”

The bishops said they addressed the letter “first and foremost to the Catholic faithful in the United States” but also offered it to others “in the hope of inspiring them to embrace this teaching.”

The letter is another component in the bishops’ National Pastoral Initiative for Marriage, which began in November 2004.