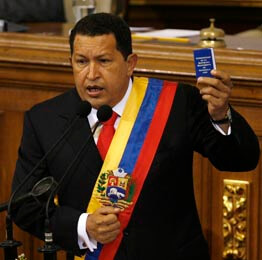 CARACAS, Venezuela – Cardinal Jorge Urosa Savino of Caracas said the Venezuelan bishops’ conference might have a special meeting to discuss Venezuelan President Hugo Chavez’s proposed constitutional reform.
The proposal “concerns the life of the Venezuelan people, of the Catholics of Venezuela and the rights of everybody,” he said. The cardinal said Venezuelan Catholics should participate in the reform process, to make it “a peace treaty for all Venezuelans and not a declaration of war.”
The reform proposal is to be debated in the National Assembly, but it is not clear whether the assembly or the people as a whole will vote on it.
Most controversially, the reform proposal presented by Chavez Aug. 15 would remove term limits for the president and concentrate more power in the presidency. Chavez, who made his name by leading a 1994 coup attempt, was first elected president in 1998, and his current term is to expire in 2012, but he has said he expects to hold office until 2021.
His proposal also would weaken regional governments, some of which are headed by Chavez opponents, according to reports in the Venezuelan press. Chavez said the reform would shift more power to the Venezuelan people.
Church leaders have been among the fiercest critics of what they see as Chavez’s efforts to concentrate his power, as well as his government’s violations of human rights and restrictions on press freedoms.
For example, Venezuelan Cardinal Rosalio Castillo Lara, a retired Vatican official living in Caracas, said recently his country was governed by “a paranoid despot.” Chavez, in turn, called the cardinal a “bandit” and has accused the bishops of lying and politicizing the church.
The existing Venezuelan Constitution was written in 1999 by a Constituent Assembly convened by Chavez.
Chavez already dominates nearly all parts of government. Every single member of the National Assembly is pro-Chavez, and he expanded the Supreme Court by adding justices who back him. The National Assembly has given Chavez broad powers to rule by decree for 18 months.
Government officials promised that the proposed constitutional reform would be broadly debated within Venezuelan society. Vice President Jorge Rodriguez said Chavez already had demonstrated “the immense capacity he has and the permanent intention to consult about the great issues of Venezuelan society.”