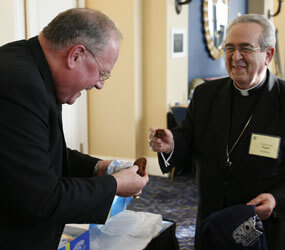 Cardinal Francis E. George of Chicago contemplated a scenario of what the church would look like without priests in his presidential address on the first day of the U.S. bishops’ annual fall general assembly in Baltimore Nov. 16-19.

He framed his remarks in the context of the Year for Priests, currently being celebrated in the church through next June.

Without a priestly ministry rooted in holy orders, he said, the ministry of teaching about the faith would fall primarily to professors, “whose obligation is first to seek the truth in the framework of their own academic discipline and whose authority to teach derives from their professional expertise.”

On their first day the bishops also heard a report on health care reform and reaffirmed as a body the statement that Cardinal George had made soon after the House approved its version of reform legislation Nov. 7, expressing the U.S. Conference of Catholic Bishops’ commitment to keep health reform legislation in the Senate abortion-neutral.

Also on their first day, the bishops heard a preliminary presentation on the last several items pertaining to a new translation of the Roman Missal. All are part of a years-long process of updating English translations of the liturgical texts.

In his remarks, Cardinal George said that without ordained priests, the “only instance of real governance in any society would be that of civil and political leaders,” he said, adding, “A civil government has no right to deprive the church of freedom to govern herself by her own laws and under her own leaders.”

Without ordained priests, he added, the role of spiritual counseling would fall to therapists – “dedicated to their clients and skilled in examining the dynamics of human personality, but without consideration of the influence of God’s grace.” Also, without ordained priests “the church would be deprived of the Eucharist, and her worship would be centered only on the praise and thanksgiving.”

Bishop Arthur J. Serratelli of Paterson, N.J., chairman of the Committee on Divine Worship, introduced five liturgical translation items for formal consideration. The translations of the Proper of the Saints, the Roman Missal Supplement, commons, U.S. propers and U.S. adaptations to the Roman Missal were to be put to a vote Nov. 17.

The bishops also heard preliminary presentations on a pastoral letter on marriage, a statement on reproductive technology, and revisions to ethical and religious directives for Catholic health care facilities that would clarify that patients with chronic conditions who are not imminently dying should receive food and water by “medically assisted” means if they cannot take them normally.

The bishops also heard reports on the activities of The Catholic University of America in Washington, and the bishops’ National Advisory Council.

Archbishop Timothy M. Dolan of New York delivered a report on the activities of Catholic Relief Services, which included a four-minute video. He praised CRS, the U.S. bishops’ overseas relief and development agency, for its “life-saving work.”

The bishops also heard an address from Archbishop Pietro Sambi, the Vatican’s nuncio to the United States.

They voted on members of the board of directors of both CRS and the Catholic Legal Immigration Network; the results were not immediately available.

During a break in the general session, Archbishop Dolan and Cardinal Justin Rigali of Philadelphia exchanged T-shirts representing their respective teams, the archbishop’s New York Yankees and the cardinal’s Phillies. The Yankees bested the Phillies four games to two to become the 2009 World Series champions.

On the second day of their meeting, the bishops were to vote not only on the Roman Missal items, but also the marriage pastoral, the revisions to the ethical and religious directives, and the document on reproductive technology, titled “Life-Giving Love in an Age of Technology.”

They also were scheduled to vote on a priority plan titled “Deepen Faith, Nurture Hope, Celebrate Life”; a series of “strategy and operational plans” for its offices and departments for the next two years; a proposed budget for 2010 and the diocesan assessment for 2011. They also were to vote on USCCB committee chairmen.

The bishops also were slated to hear a report on the Catholic Campaign for Human Development; a preliminary report from the bishops’ Committee for Protection of Children and Young People on the causes and context study on clergy sexual abuse of minors conducted by the John Jay College of Criminal Justice; and a report by the National Religious Vocation Conference on a recent study of religious vocations.