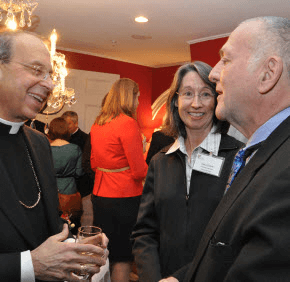 The 2013 legislative session is the first for Archbishop Lori since he assumed leadership of the Baltimore archdiocese in May 2012. The archbishop serves as chairman of the MCC, which advocates for public policy on behalf of the state’s bishops.

The reception was held for lawmakers and bishops to get to know each other, Archbishop Lori told those gathered at the reception.

“The church’s social teaching cuts across all the usual political boundaries and categories,” he said, adding that the church’s social positions are bound by an understanding of the dignity of the human person.

Archbishop Lori pointed to the work of the Catholic Church in Maryland, which includes about 1.2 million Catholics: 50,000 students served in Catholics schools and 900,000 people served by Catholic social services last year.

Cardinal Donald W. Wuerl, Archbishop of Washington, added that it is important to see the people behind the statistics, recounting a recent visit to a clinic for undocumented immigrants where he was impressed by the courage demonstrated by a young boy with a toothache.

“Isn’t that what we’re about?” he asked, referring to serving people in need.