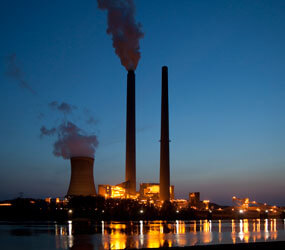 WASHINGTON – The head of the U.S. bishops’ Committee on Domestic Justice and Human Development joined with others in praising a new federal rule to cut down on the amount of toxins emitted from coal- and oil-fired plants.

“It just makes good sense to want to have clean air for our children and families to breathe and for future generations,” said a statement by Bishop Stephen E. Blaire of Stockton, Calif., issued Dec. 21, the date the new EPA rules on toxins were unveiled.

“Children, inside and outside the womb, are uniquely vulnerable to environmental hazards and exposure to toxic pollutants in the environment,” he said. “Their bodies, behaviors and size leave them more exposed than adults to such health hazards.”

The EPA rule, which has been in the works since 1990, is intended to cut mercury, arsenic and other toxins by up to 90 percent by 2016, the year the rule would be fully implemented.

The rule is expected to eliminate among other things, 11,000 premature deaths and 130,000 cases of asthma a year.

EPA Administrator Lisa Jackson, at a Dec. 21 news conference at the Children’s National Medical Center in Washington, said that $9 will be saved in health and other costs for every dollar spent in compliance with the regulations. Jackson’s two sons have suffered from asthma.

“Children are uniquely vulnerable to environmental hazards and exposures to toxic chemicals in the environment,” said a U.S. Conference of Catholic Bishops issue brief written earlier this year.

“Exposure to air pollutants and toxins is significantly more harmful to children, born and unborn. Children in poverty and children of color are at a disproportionate risk, with routinely higher rates of lead poisoning and asthma-related deaths and hospitalization,” it added.

Mercury emitted by smokestacks often falls to the ground and finds its way into the water, where it is absorbed by plants. Small fish eat the plants, and bigger fish like tuna eat the smaller fish until those bigger fish are eaten by humans. “When you get mercury poisoning, the damage is permanent and irreversible,” said Dr. Albert Rizzo, national volunteer chair of the American Lung Association, at the news conference.

When added to other recent regulations curbing vehicle emissions and downwind pollution from power plants that affect residents of other states, the toxins rule will help save 45,000 lives a year, said a statement from Carol Browner, the EPA administrator during the Clinton administration and now a senior fellow at the Center for American Progress.

The USCCB’s Environmental Justice Program has been involved in the toxins issue since before it hosted a 2007 conference, “Protecting Human Life and Caring for Creation,” sponsored by the Catholic Coalition for Children and a Safe Environment on the effects of environmental toxins on unborn children. A year later, a convocation on “Life, Justice & Family: Partners in the New Evangelization” included a session called “Toxins, the Environment and the Child in the Womb.”

In November, in anticipation of the new toxins rule, the USCCB, the National Association of Evangelicals and the Evangelical Environmental Network jointly sponsored a Senate staff briefing, “Mercury and Toxic Air Pollution Impacts Unborn Children: A Public Health and Moral Perspective.”

“For some, there seems to be a connection” between the pro-life position and the need to curb toxins, said Kathy Saile, USCCB director of domestic social development. “For some, it’s still a compartmentalized political issue.”

The toxins rule is one of the last major pieces of regulation to come from the 1990 Clean Air Act. James Salt, executive director of Catholics United, noted that the bill “was passed by a Republican president (George H.W. Bush) and a Catholic Republican EPA administrator,” William K. Reilly.

The rule had been fought against and delayed, and some Republicans in Congress were already talking about voting to scuttle the rule. “I’m not surprised,” Jackson said at the news conference.” They’ve voted 190 times” to block federal rules and regulations.