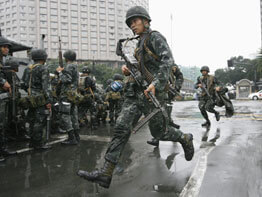 Bishop Antonio Tobias of Novaliches and retired Bishop Julio Labayen of Infanta stayed with former military officials at the hotel until late afternoon, when troops moved in and arrested some of the participants, including at least one of the bishops.

“I am here to keep the peace, to ensure there is no violence,” Bishop Tobias told the Asian church news agency UCA News, insisting that he “did not know” of any plan for the group to walk out of a trial and march to the hotel.

Sen. Antonio Trillanes, Brigadier Gen. Danilo Lim and several other military officers walked out of the Makati City trial court around 11 a.m. Nov. 29 during a hearing on their alleged role in a mutiny against Arroyo in 2003. Makati City is located in metropolitan Manila.

As he left the court, Lim read a statement calling on people in the military and public service to withdraw their support for Arroyo and her “illegal and immoral” government. Earlier, Trillanes was on the radio asking the public to join his group in stopping “corruption and abuses” by Arroyo. He said his group would stay in Makati “to force” Arroyo “to step down from office.”

Some of the people in court put red bands around their arms and marched with Trillanes and Lim to the hotel. Some marchers carrying guns said they were with the Armed Forces of the Philippines. Former Vice President Teofisto Guingona was with the protesters at the hotel.

Manila Cardinal Gaudencio Rosales appealed to authorities not to use violence in resolving the incident.
“Violence by any side and for any reason is never justified,” the cardinal said in a statement. He also advised the government to address the issues of justice and “legitimate leadership” that the protesters raised.

In a televised interview earlier in the day, Bishop Tobias said, “I’m giving my individual position as a citizen of this republic, even if I’m a bishop.”

He added: “I want the people to go with what is right. If you think that Gen. Lim and Sen. Trillanes have done the right thing, then support (them).”

Bishops Tobias and Labayen, together with Bishop Deogracias Iniguez of Kalookan, serve as spiritual advisers to the Movement for a Nationalist Economy. The movement has called for Arroyo and several other government leaders to step down and make way for a “transitional government” led by Chief Justice Reynato Puno until special elections are conducted.

The three bishops have said the country’s top leaders must step down because the government they are leading has lost its moral ascendancy to rule following allegations of bribery and corruption.

The Movement for a Nationalist Economy was to lead a rally Nov. 30 in downtown Manila to press its demands, Bishop Iniguez told UCA News in a phone interview during the hotel standoff.

He said he was not with the Trillanes group and was watching developments to see how these would impact the planned rally. The bishop said the Movement for a Nationalist Economy has had “no formal” meetings with Trillanes’ group, though “we agree Arroyo should step down and a caretaker government is needed.”

The bishop said he thought Trillanes’ group had raised valid issues on corruption in the military.

“As far as democracy is concerned, all sectors must be given voice, and people will have to choose after they have studied the issues,” he said. He expressed openness to discussions with the military but stressed, “We are against violence.”

Bishop Iniguez, chairman of the Public Affairs Committee of the Catholic Bishops’ Conference of the Philippines, told reporters in Manila the two bishops in the Peninsula Hotel were “acting on their own volition” and “do not represent” the bishops’ conference.

“I am for the stoppage of the rule of President Arroyo,” he added. “‘People power’ is part of democracy. I just couldn’t join (the group at the hotel) because I have a prior appointment.”