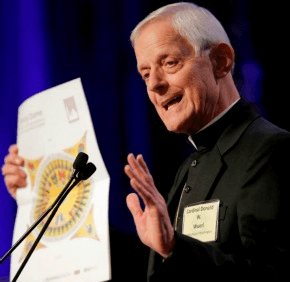 BALTIMORE – A proposed national collection does not usually receive a chorus of praise from bishops, but a cardinal’s request for financial aid in decorating the central dome of the Basilica of the National Shrine of the Immaculate Conception in Washington did.

Cardinal Donald W. Wuerl of Washington told the bishops Nov. 17 during their fall general assembly in Baltimore that the decoration of the shrine’s central dome with mosaic art would complete an architectural plan that began in 1920 with the placing of the building’s cornerstone.

The cardinal, who serves as the chairman of the shrine’s board of trustees, said the central dome would depict the Holy Trinity and Mary under the title of the Immaculate Conception, with “a procession of saints” associated with the shrine or the United States surrounding them. These would include St. John Paul II, St. John XXIII, Blessed Teresa of Kolkata and St. Junipero Serra, he said.

Displaying a sketch of the completed project, he told his fellow bishops that “you can see that it is going to be a strikingly beautiful way to complete the last remaining part” of the national shrine.

The central dome rises 153 feet from the floor of the upper church and covers nearly 20,000 square feet. Cardinal Wuerl said it is five times the size of the shrine’s Redemption Dome and Incarnation Dome, completed in 2006 and 2007, respectively, and “accordingly the cost is going to be five times the cost of those other domes.”

The national collection to fund completion of the dome would take place in 2017, he said, adding that $4.2 million had already been raised in pledges and cash “and we are awaiting responses on an additional $3 million in requests and have identified another $1 million” in potential funding.

He noted that there had not been a request to the bishops for direct financial support of the shrine since 1953, when a national collection raised $8 million to build the upper church. “Every 62 years we will be back,” he said with a laugh.

Cardinal Wuerl’s proposal prompted nearly a dozen bishops to speak in favor of the collection and to praise the shrine as a national symbol of the faith of U.S. Catholics.

“None of us is looking for more second collections, but this is a very worthwhile cause and expresses to the country our faith,” said Archbishop Gregory M. Aymond of New Orleans.

Cardinal Daniel N. DiNardo of Galveston-Houston, who is USCCB vice president, said the shrine is “an amazing place for people to be reconciled” in confession and “an object of beauty.”

“In the midst of so many things that we have to do, something of beauty is important,” he added.

Archbishop William E. Lori of Baltimore praised the “tremendous pastoral work and outreach” carried out by the shrine and said, “Completing this project will really make the shrine ever more of what it was meant to be – a living sign of the faith of the Catholics of the United States.”

Bishop Kevin J. Farrell of Dallas, USCCB treasurer and chairman of the bishops’ Committee on Budget and Finance, said he usually rises to “complain about spending” at the bishops’ meetings but not this time.

“We’ve raised hundreds of millions of dollars for many worthy causes,” he said. “It’s time we finished what was begun nearly 100 years ago.”

Although no one rose in opposition to the collection, it did not pass unanimously. With only the heads of dioceses, archdioceses and eparchies eligible to vote, it passed 135-31, with four abstentions.

Cardinal O’Brien: What’s happening to Christians in the Middle East is genocide