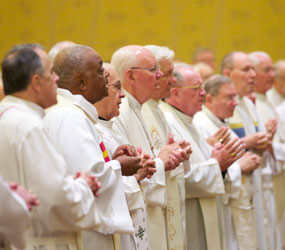 BELLEVUE, Wash. – Following a lively debate on the first day of their spring general assembly near Seattle, the U.S. bishops voted overwhelmingly to authorize preparation of a 50-page document on preaching for consideration in November 2012.

St. Louis Archbishop Robert J. Carlson presented the proposal on behalf of the Committee on Clergy, Consecrated Life and Vocations, which he chairs, but said the document would be drawn up in consultation with various committees of the U.S. Conference of Catholic Bishops.

Archbishop Carlson said the document would be “at once inspirational and practical, … grounded in the tradition of the church” and would aim to “adequately convey the purpose of the homily at Mass: the personal encounter with the Incarnate Word.”

The topic seemed to light a spark in the bishops, more than a dozen of whom spoke in favor of the proposed document.

Describing himself as a member of “the first lost generation of poor catechesis,” Bishop Alexander K. Sample of Marquette, Mich., said his generation of post-Vatican II Catholics had “raised up another generation that is equally uncatechized.”

Although some have expressed the sentiment that “the homily should not be a time for catechesis,” Bishop Sample said “we cannot lose that opportunity to truly catechize and form our people” when they are gathered for Sunday Mass.

Cardinal Theodore E. McCarrick, retired archbishop of Washington, said that even at bishops’ meetings 35 years ago, “some would rise to say that we need to have something on sermons.”

“People are looking for it and desperately need it,” he said. “It is such an important part of our responsibility as bishops.”

But he said the topic of preaching was “so complicated and there are so many things we hope” to include in such a document that it is “sort of impossible” to get everything into a 50-page document. But, he added, “nothing is impossible with God.”

Retired Auxiliary Bishop Peter A. Rosazza of Hartford, Conn., said he hoped the document would include information about “different preaching styles,” such as those used by African-American or Hispanic preachers, while Bishop Salvatore J. Cordileone of Oakland, Calif., said he thought the document should focus not only on Sunday homilies but on sermons at funerals and weddings.

The vote in favor of the proposed document was 187-3.

Later in the meeting, the bishops also overwhelmingly OK’d a modification of previously approved “priorities and plans” to allow four other committees – Cultural Diversity, Divine Worship, Doctrine, and Evangelization and Catechesis – to work with the consecrated life committee on the document.

But drafting of the updated document was suspended in March 2007 after Pope Benedict XVI announced an upcoming synod on the Bible. Responsibility for such a document also passed to a new committee with restructuring of the bishops’ conference around that time.

“As originally approved by the bishops in November 2005, it is our intention that the document will focus specifically on preaching at the Sunday Mass, that it be around 50 pages in length, and that it be published in Spanish and English,” Archbishop Carlson said.

He said the homily offers “a privileged opportunity for ordained ministers to catechize the liturgical assembly, to treat the great themes of the Christian faith.”

“With all the complexities of modern technology and changing social attitudes, our Catholics need to know the mind of Christ and the teachings of the church,” the archbishop said. “Yet it is not enough to state correctly the truths of faith from the pulpit, but to propose them in such a way as to draw attention to their attractive beauty, wisdom and connection to Christ.”