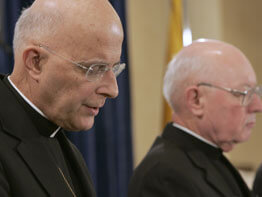 BALTIMORE – In a series of quick votes Nov. 14, the U.S. bishops approved new guidelines for the use of music in worship, English- and Spanish-language rituals for the celebration of weekday Liturgies of the Word, and revised Lectionary readings for Lent.

The documents, presented by Bishop Donald W. Trautman of Erie, Pa., outgoing chairman of the Committee on the Liturgy, prompted little discussion as the bishops wrapped up the public part of their Nov. 12-15 fall general meeting in Baltimore.

The music document, called “Sing to the Lord: Music in Divine Worship,” was accepted by the bishops in a 183-22 vote, with three abstentions.

It had originally been proposed as a document that would have required Vatican approval and would have been binding on bishops in their dioceses. But Bishop Trautman said the committee decided to recommend the document only as a guideline for bishops, not as “normative law.”

Members of the U.S. Conference of Catholic Bishops nevertheless took a keen interest in the document, proposing nearly 400 amendments to what was the committee’s 11th draft.

“Sing to the Lord” updates a 1972 USCCB statement on music in worship and is to be followed within three years by a directory of liturgical songs for use in U.S. parishes. Like the 1972 statement, it suggests “three judgments” – liturgical, pastoral and musical appropriateness – be applied in considering the use of music in liturgy.

“No judgment is sufficient on its own; nor does any one judgment prevail over the other,” it says.

“Music, a cry from deep within our being, is a way for God to lead us beyond ourselves to the realm of higher things,” the document says. “No wonder singing together in church expresses so well the sacramental presence of God to his people.”

The liturgical books for weekday celebration of the Liturgy of the Word received approval from the bishops by votes of 190-18, for the English version, and 188-16, with five abstentions, for the Spanish.

Bishop Trautman said the documents arose from concerns expressed by the Diocesan Federation of Liturgical Commissions about what were seen as liturgical abuses related to “replacing the daily celebration of the Eucharist with a Communion service” in the absence of a priest.

Those services would sometimes be referred to as “Sister’s Mass” or “the lay Mass,” causing confusion, he said.

Before the vote Bishop Donald J. Kettler of Fairbanks, Alaska, expressed gratitude for the liturgical books, which he said were much needed in dioceses like his with many remote parishes where no priest is available even to celebrate Sunday Mass some weeks. “This document is most helpful,” he said.

The final liturgical document, a revision of all the Sunday and weekday Lectionary readings for Lent, is part of a multiyear project of revising the entire Lectionary. The bishops OK’d the Lenten readings by a 199-6 vote, with five abstentions.

Among the problems that the revisions aim to correct are too-lengthy sentences that are difficult for liturgical proclamation; pronouns without a clear antecedent; and problems with poetic expression, grammar and vocabulary.

Some of the changes in the 111-page text simply replace the words “he” or “they” with Jesus, God, the disciples or other terms to make the passage more clear. Others make the text more gender-neutral by replacing, for example, “fathers” with “ancestors” or “men” with “human beings.” But in at least one case, it changes “person” to “man.”

Other revisions are more substantive: “not according to our works” becomes “not because of any merit of ours”; “by the power that enables him also to bring all things into subjection to himself” becomes “by his power to subject everything to himself”; and “as a holocaust” becomes “as burnt offerings.”

Except for the music guidelines, each of the liturgy documents must be submitted to the Vatican’s Congregation for Divine Worship and the Sacraments before taking effect in the U.S.