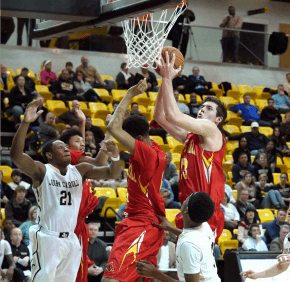 By Paul McMullen
pmcmullen@CatholicReview.org
As is the annual custom in prep school basketball in Maryland, all eyes will turn west, to Allegany County, on the first two weekends of March.
Half the field in the 55th annual Alhambra Catholic Invitational Tournament at Frostburg State University March 12-14 will come from schools in the Archdiocese of Baltimore. In addition to host Bishop Walsh of Cumberland, the field includes Calvert Hall, John Carroll and Our Lady of Mount Carmel.
The three Baltimore Catholic League rivals took turns atop the area rankings compiled by the Baltimore Sun and Varsity Sports Network. Calvert Hall heads to Frostburg on a roll, as coach John Bauersfeld’s team has won 12 straight, thanks to a 53-52 victory over John Carroll in the BCL final, courtesy of Nico Clareth, the tournament’s Most Outstanding Player, and junior Justin Gorham, whose tap-in won it at the buzzer.
The 21st annual Bishop Walsh Girls Invitational, meanwhile, will be held March 5-7.
In addition to the host team, the field includes Seton Keough, St. Maria Goretti of Hagerstown, and St. John’s Catholic Prep of Frederick. The Vikings had a perfect season in the Interscholastic Athletic Association of Maryland’s B Conference, until they were upset by Notre Dame Preparatory in the tournament quarterfinals.
McDonogh School, No. 1 in the area rankings and the IAAM A Conference champion, is the favorite. Seton Keough, meanwhile, is ranked No. 12 by The Sun.
For Alhambra Invitational news and updates, visit alhambratournament.com
Also see:
Climbing for a cause: Mountaineer set to climb six of the world’s tallest peaks
John Carroll senior, Mount Carmel coach earn top basketball honors
PrevNext