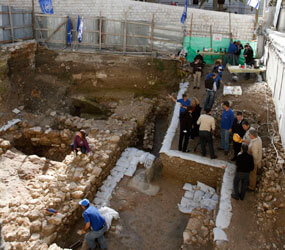 JERUSALEM – Auxiliary Bishop Giacinto-Boulos Marcuzzo of Jerusalem said the Christian community in Nazareth was joyful at the recent discovery of the remains of a first-century dwelling.

“This belongs to the time of Jesus and we can now see how (people lived),” said Bishop Marcuzzo, noting that the dwelling had remained largely intact throughout the ages. “The ruins … were not destroyed during history. There were lots of (wars and battles) which destroyed buildings but that house was kept safe. Why? We don’t know why, but certainly there is a reason why that house was kept safe.”

As the first dwelling from the period to be discovered in Nazareth, the remains are of “utmost importance” and reveal new information about how people lived during Jesus’ lifetime, said Yardena Alexandre, excavation director at the Israel Antiquities Authority. She said several tombs from that time period had been found in earlier digs but, until this house, no evidence of a human settlement had been uncovered.

The structure was found next to the Basilica of the Annunciation, where the floor of a former convent was being removed in a salvage excavation conducted by the antiquities authority to prepare for the construction of the International Marian Center of Nazareth. The Association Mary of Nazareth said it would incorporate the archaeological remains inside its planned center.

Nazareth is where Mary received the revelation from the angel Gabriel that she would conceive a child. Jesus spent the majority of his life in Nazareth, preaching throughout the Galilee region.

According to written sources archaeologists know that in the first century Nazareth was a small village, located in a valley, said Alexandre.

“The discovery … reveals for the very first time a house from the Jewish village of Nazareth and thereby sheds light on the way of life at the time of Jesus. The building that we found is small and modest and it is most likely typical of the dwellings in Nazareth in that period,” said Alexandre.

She told the Associated Press it could be concluded that, as a child, Jesus may have played near and around the structure and that, as an adult, he may have been familiar with the building.

The uncovered building consists of two rooms and a courtyard with a rock-hewn cistern used to gather rainwater. A few artifacts – mainly fragments of pottery vessels from the first and second centuries – were recovered from inside the building.

The modern Basilica of the Annunciation, consecrated in 1969, was constructed above Crusader- and Byzantine-era churches. A cave in the middle of these churches was already ascribed as the house of Jesus’ family, although no archaeological evidence exists to prove the claim.