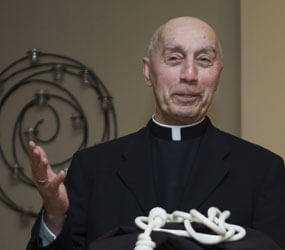 WILMINGTON, Del. – Bishop Michael A. Saltarelli, the New Jersey-born priest who guided the people of the Diocese of Wilmington through 12 years of significant growth and unprecedented challenges, died early Oct. 8 in Christiana Hospital, where he had been staying since undergoing colon surgery Sept. 29.

He was 77 and had been treated for cancer and heart disease since retiring as the eighth bishop of Wilmington in July 2008.

Plans for his funeral were not immediately announced.

“Bishop Saltarelli loved the Lord, loved the church and loved the Diocese of Wilmington, and the people of the diocese returned that love,” said Bishop W. Francis Malooly, his successor, in a statement. “He was a wonderful shepherd to his flock and a great friend to me. He will be greatly missed by us all, but we are comforted knowing that he is with God, whom he served so well throughout his life.”

During Bishop Saltarelli’s tenure the diocese expanded from 164,000 to 233,000 Catholics, including thousands of Hispanic immigrants from Mexico, Guatemala and elsewhere. The bishop responded to the population shift by authorizing the creation of three new parishes and two regional Catholic elementary schools and the closing or merging of six underpopulated schools in and around Wilmington.

The bishop also pushed hard for priestly vocations, ordaining 23 men in 12 years, and expanded the permanent diaconate by ordaining 47 men. He reached out to Hispanic immigrants and black Catholics through increased ministries, and in 2003 he and leaders of the Diocese of San Marcos, Guatemala, established a solidarity partnership in response to the arrival of Guatemalan immigrants to the southern parts of the diocese.

Bishop Saltarelli made significant contributions on national Catholic discussions concerning the sanctity of human life in the womb and all its stages, the need to reach out to inactive Catholics, the need for a consistent use of the Catholic funeral rites and the importance of solid Catholic marriage preparation.

Bishop Saltarelli was an active member of the U.S. Conference of Catholic Bishops, serving on committees or boards on education, African-American Catholics, the National Religious Retirement Office, the laity, nominations and communications.

In accordance with church law, Bishop Saltarelli offered his resignation as bishop of Wilmington to Pope Benedict XVI when he turned 75. On July 7, 2008, the pope accepted the bishop’s resignation and appointed Bishop Malooly as his successor.

In the past 15 months the bishop faced health challenges that limited his activity. He was hospitalized for treatment of cancer in August 2008 and underwent emergency heart bypass surgery in early April. He continued to lead services and make appearances, sometimes walking with the aid of a cane.

Michael Angelo Saltarelli was born Jan. 17, 1932, in Jersey City, one of seven children of Michael A. and Caroline (Marzitello) Saltarelli.

The future bishop attended Holy Rosary Elementary School and Ferris High School, both in Jersey City. After receiving a bachelor of arts degree in 1956 from Seton Hall University, in South Orange, he entered Immaculate Conception Seminary in Darlington. In 1975 he received a master’s degree in religious studies from Manhattan College in New York.

Ordained a priest of the Archdiocese of Newark May 28, 1960, Father Saltarelli served at Holy Family Church in Nutley until 1977, when he was appointed pastor of Our Lady of the Assumption in Bayonne.

Archbishop Peter L. Gerety, then head of the Newark Archdiocese, appointed him executive director for pastoral services for the archdiocese, the same year Father Saltarelli was named a monsignor by Pope John Paul II.

In 1985, Monsignor Saltarelli was appointed pastor of St. Catherine of Siena Church in Cedar Grove, and in 1987 then-Archbishop Theodore E. McCarrick, who succeeded Archbishop Gerety in Newark and was one of the future bishop’s spiritual mentors, appointed him vicar for priests.

Pope John Paul named Monsignor Saltarelli an auxiliary bishop of Newark June 12, 1990. The new bishop became rector of Newark’s Sacred Heart Cathedral while remaining the vicar for priests. It was as rector of the cathedral that Bishop Saltarelli greeted Pope John Paul when he visited Newark in October 1995.

It was just a month later, on Nov. 21, 1995, that Pope John Paul named Bishop Saltarelli the eighth bishop of the Diocese of Wilmington, succeeding Bishop Robert E. Mulvee.

Bishop Saltarelli was installed as bishop of Wilmington Jan. 23, 1996, in St. Elizabeth’s Church.

Wilmington is a suffragan see in the Province of Baltimore, of which Archbishop Edwin F. O’Brien is Metropolitan Archbishop.

“On behalf of the faithful of the entire Metropolitan See of Baltimore,” Archbishop O’Brien said, “I express my great sadness to God’s people in the Diocese of Wilmington at the loss of their beloved bishop.

“With a love for his priestly ministry always in his heart, Bishop Saltarelli led the church in Wilmington through a period of tremendous growth and through times of pain and difficulty. Indefatigable throughout his battle with cancer, Bishop Saltarelli continued to serve God with great love for His people and with the selfless witness that were hallmarks of his priestly ministry.

“Bishop Michael Saltarelli was an outstanding bishop,” said Cardinal William H. Keeler, archbishop emeritus of Baltimore. I have known him for many years and esteemed him as one who consistently fought for good causes and whose departure from this world leaves us all diminished.”