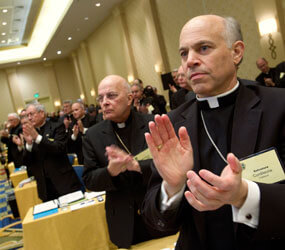 A series of advertisements for the U.S. bishops’ campaign to strengthen marriage have been successful in the numbers of people they have reached and the awards they have garnered from professional advertising organizations, Bishop Kevin C. Rhoades of Fort Wayne-South Bend, Ind., said Nov. 14.

The bishop, who is chairman of the Committee on Laity, Marriage, Family Life and Youth, made the comments on the opening day of the bishops’ fall general assembly in Baltimore.

In a presentation on the work of the Subcommittee for the Promotion and Defense of Marriage, Bishop Rhoades said the public service announcements with messages about marriage had been measured as having 1.3 billion “audience impressions” since they began several years ago.

He said the campaign “which won a national public relations award in 2009, has been the most successful of its kind ever sponsored by the USCCB.”

A series of public service announcements with the theme of “a good marriage goes a long way,” was released in September to 1,600 television stations and 7,000 radio stations, he said.

Bishop Rhoades reported that a series of ads for the “For Your Marriage” campaign that began in July 2007 had nearly a quarter of a million broadcasts.

A website developed for the campaign – “For Your Marriage,” foryourmarriage.org, and its Spanish-language counterpart, “Por Tu Matrimonio,” portumatrimonio.org – also is being used in the campaign, he said.

“Since it was launched four years ago, it has attracted over 1.7 million visits with more than 6 million page views,” said Bishop Rhoades. “I’m also proud to report that (the site) won a first place Thoth Award from the Washington chapter of the Public Relations Society of America.”

He said the Spanish-language counterpart of the campaign has also done well, with a following of more than 1,900 Facebook fans, 300,000 visitors to the “Por Tu Matrimonio” website and a radio campaign being aired around the country.

And a new website has just been launched – “Marriage, Unique for a Reason.” The site is www.marriageuniqueforareason.org.

In a brief related report, Bishop Salvatore J. Cordileone of Oakland, Calif., chairman of the Subcommittee for the Promotion and Defense of Marriage, said there are a great many challenges on the legal front to traditional marriage, ranging from various states legalizing same-sex marriage to the repeal of the “don’t ask, don’t tell” policy on gays in the military.

He said one thread of the subcommittee’s efforts is to work on persuading the Obama administration to “press the reset button on the trajectory of undermining marriage.”