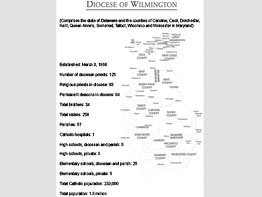 WILMINGTON, Del. – Bishop W. Francis Malooly is about to give new context to the phrase, “Mountains to the Shore.”

Pope Benedict XVI announced July 7 that Bishop Malooly has been appointed the new Bishop of the Diocese of Wilmington, Del., which includes the entire state of Delaware and the nine counties of Maryland’s Eastern Shore.

Since March 2001, Bishop Malooly has been the western vicar of the Archdiocese of Baltimore, ministering to an area that stretches from Columbia and Westminster to the Appalachian Mountains.

‘This is going to be a big change,” Bishop Malooly said. “Bishop (Michael A.) Saltarelli showed me one little hill, said that this is as big as it gets here. I’m thinking Cumberland and Oakland.”

Bishop Malooly’s engaging nature was on display at a morning press conference at St. Ann Catholic School, where he rose to lead a standing ovation for his predecessor, Bishop Saltarelli, who is retiring.

The two first worked together in 1994, preparing for the visit of Pope John Paul II.

“He wasn’t a bishop then,” Bishop Saltarelli said, “but when he became a bishop, I was at the ordination, and in the back of my mind, I said ‘there’s someone who can take my place.’ I really mean that. He’s a good, holy man. He’s a people person, so we’re very grateful.

“It’s a fantastic diocese. The faith is strong here, but we’re a minority, unlike Baltimore.”

Few possess the institutional knowledge of the Archdiocese of Baltimore that Bishop Malooly has developed.

“I witnessed this firsthand over the past year, and I am personally grateful for his dedicated service and most especially for his unwavering and supportive friendship,” Archbishop Edwin F. O’Brien noted in a statement. His seasoned, prudent counsel will be missed by so many of us.”

Bishop Malooly attended the parish school of St. Ursula in Parkville, and secondary and graduate school at St. Charles, a since-closed minor seminary in Catonsville. He then attended what is now St. Mary’s Seminary and University in Roland Park. Raised in a large, extended family, he was ordained a priest in 1970 by an uncle, the late Bishop T. Austin Murphy.

Bishop Malooly, who resides at St. Thomas More, Baltimore, served as associate pastor of St. Joseph, Cockeysville, and St. Anthony of Padua in Northeast Baltimore. His work with young people led Archbishop William D. Borders in 1981 to appoint him associate administrator at what is now the Monsignor O’Dwyer Retreat House in Sparks.

A year later, he was elevated to administrator at the retreat house. In 1984, he became director of the office of clergy personnel, and in 1989 was appointed chancellor and vicar general of the archdiocese. He became western vicar in 2001, and found irony in his being described as “pastoral.”

“I’ve always been flattered when people say that, (because) I was never a pastor,” Bishop Malooly said. “I ran a youth retreat house, but I’ve had over a thousand weddings in my life. I’ve probably done more funerals, but (all) those, the baptisms, those moments when I can be with families and be a part of their lives and feel God’s spirit there, that’s always moved me.”

Four weeks to the day after being contacted by the papal nuncio with an appointment that he promptly accepted, Bishop Malooly spoke of building on relationships already in place.

“Even before we worked together on the MCC, he was known as a priest’s priest,” Monsignor Barres said. “He’s completely engaging as a priest. He’s the type who pours out his life to people. That’s the thing you immediately pick up on. That, and his sense of humor.”

Bishop Malooly joked that he was going to move the bishop’s residence to one of the seaside resorts where he has vacationed.

“Though not a native son, in many ways, this feels like a homecoming,” he said. “I’ve often considered Wilmington my home diocese during countless summer vacations at the Delaware and Maryland shores.”

Bishop Malooly will be installed the ninth Bishop of Wilmington on Sept. 8, the feast of the birth of the Blessed Virgin Mary. He had not had the opportunity to discuss the appointment with his western vicariate staff.

Asked to assess his areas of expertise, Bishop Malooly described himself as a “generalist.”

“The best thing I’ll bring, in all seriousness, is that I love being a priest,” Bishop Malooly said. “If I can encourage those working with me to be joyful in ministry … We don’t lure people to church work or church attendance if we’re not happy.”