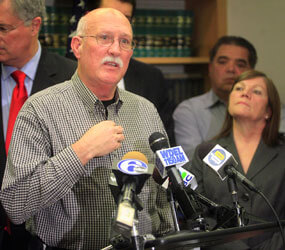 WILMINGTON, Del. – Bishop W. Francis Malooly said he hopes and prays that the Diocese of Wilmington’s recent settlement with survivors of clergy sexual abuse will begin the healing process for survivors and help the church “emerge purified and renewed.”

The diocese late Feb. 2 reached an agreement to pay survivors of sexual abuse by priests more than $77.4 million to settle nearly 150 claims of abuse. The agreement will end pending lawsuits against the diocese and several parishes and commits the diocese to give to survivors its files on sexual abusers.

The agreement, pending approval of all creditors and the U.S. Bankruptcy Court, could bring to an end by this summer the Chapter 11 process the diocese began in October 2009. The diocese declared bankruptcy to settle the cases filed by the survivors in a “fair and equitable way,” while continuing the ministries of the church.

“It is our hope and prayer that the settlement’s monetary and nonmonetary terms will begin the healing process for clergy sexual abuse survivors,” Bishop Malooly wrote Feb. 3 in a letter to the people of the diocese.

The bishop noted that the $3 million judgment against St. Elizabeth Parish that was awarded last December will be paid from the settlement, “sparing the people of St. Elizabeth’s this tremendous financial burden.”

The $77.4 million settlement is $3.4 million higher than the amount the diocese offered in a settlement plan Jan. 10. The additional millions were at the heart of the current negotiations, said diocesan attorney Tony Flynn. “We were able to bridge that gap with funds from insurance and by caps on attorneys’ fees to minimize the costs going forward.” The insurers agreed to add about $1.4 million to the settlement’s trust fund, he said.

The agreement also preserves the diocese’s lay employee pension fund by increasing it by $5 million and by including a pledge from the diocese to add $2 million to the fund each year, said Flynn.

The agreement does not settle suits filed by sexual abuse survivors against religious orders in the diocese. During a news conference Feb. 3, Thomas S. Neuberger, attorney for the firm that represents many of the abuse survivors, said he would seek as much as another $80 million from the orders.

According to the settlement, funds from the Catholic Diocese of Wilmington Inc., and contributions from nondebtor Catholic entities including the Catholic Diocese Foundation, Catholic Cemeteries, Siena Hall, Seton Villa, Children’s Home, insurance carriers and the parishes themselves, will be placed in a trust to pay survivors of clergy sexual abuse and other creditors.

In addition to agreeing to hand over files on sexual abuse, other nonmonetary terms of the diocese’s agreement include:

– Bishop Malooly will continue to meet with any sexual abuse survivor who wishes to meet with him and will send a letter of apology to survivors and their families.

– The diocese will display a plaque in each of its institutions that states that sexual abuse of any kind will not be tolerated.

– The diocese will continue to review and enforce its child-protection policies and will post results of the annual audit by the U.S. bishops’ on compliance with the “Charter for the Protection of Children and Young People.”

Bishop Malooly recalled in his Feb. 3 letter that when he was installed as bishop of Wilmington in September 2008, after serving as an auxiliary in the Archdiocese of Baltimore, he apologized to survivors of clergy sexual abuse “for the crimes that were committed against them and the innocence that was stolen from them by the despicable and sinful acts of some Catholic priests and others representing our church.”

He said he “vowed to continue the good work begun by Bishop Michael Saltarelli (his predecessor) to bring healing to survivors and their families. It was with this goal in mind – along with the desire to continue the pastoral, educational and charitable work of our parishes – that I made the decision to reorganize under Chapter 11 of the U.S. Bankruptcy Code in October of 2009.”

The bishop asked members of the diocese to pray for the continued healing of survivors of sexual abuse and their families and “that the Holy Spirit will continue to guide us in the months and years ahead so that we, as church, will emerge purified and renewed.”