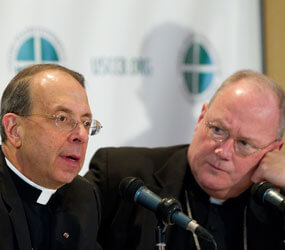 After a lengthy report from the chairman of a new Ad Hoc Committee for Religious Liberty, the president of the U.S. Conference of Catholic Bishops said he came away from a recent meeting with President Barack Obama encouraged about some aspects of religious rights concerns.

At a news conference following the session, New York Archbishop Timothy M. Dolan, president of the USCCB, said he came away from a Nov. 8 meeting with Obama “a bit more at peace than when I entered” the Oval Office when it comes to religious liberty.

He said he found the president to be “very open to the sensitivities” of the U.S. Catholic Church on issues related to religious freedom that the two discussed. He said the meeting touched on a wide range of topics and that by mutual agreement with the White House, details of the meeting would not be made public, Archbishop Dolan said.

He said the current issues related to religious liberty might be an area where there is room for compromise “as long as we’re not compromising our principles.”

Archbishop Dolan said it’s part of the current culture to try to limit the role of religion in the public square as a philosophical shift, “to push religion back into the sacristy” in a way, or in other words, to keep churches from participating in “the public square.”

But the church has faced such efforts since the early days of Christianity, he added.

Among the situations Bishop Lori described in his presentation to the bishops are several related to policies of the Department of Health and Human Services. They include an HHS mandate requiring no-cost coverage of contraception and sterilization in most health plans.

The mandate is what the federal government terms an “interim final rule” that has “the full force and effect of law.” Religious groups have objected to it, saying that providing the coverage violates their conscience rights and claim that a proposed religious exemption is too narrowly drawn.

The attention has focused on requirements in the guidelines for the new grants that called for agencies to offer the “full range of reproductive service,” including abortion and contraception, to trafficking victims.

In 2009, the American Civil Liberties Union of Massachusetts filed a lawsuit against the U.S. Department of Health and Human Services for not making the U.S. Catholic bishops’ agency include referrals for abortion, sterilization and artificial contraception in its anti-trafficking program. That case is still pending.

“Contrary to conscience protections that are already a matter of law,” Bishop Lori said. “(Catholic Relief Services) and MRS were told that new condition for the renewal of cooperative agreements was the provision of so-called reproductive services.” He added that the condition “we hope – and pray – may soon be dropped.”

Bishop Lori also cited the Department of Justice’s shift from defending the Defense of Marriage Act to opposing it in court “as an act of ‘bias and prejudice’ akin to racism, thereby implying that churches which teach that marriage is between a man and a woman are guilty of bigotry.”

He said the bishops see a pattern in culture and law to treat religion “as merely a private matter between an individual and one’s own God. Instead of promoting toleration of differing religious views, some laws, some decisions and some administrative regulations treat religion not as a contributor to our nation’s common morality but rather as a divisive and disruptive force better kept out of public life.”

Bishop Lori was named to head the ad hoc committee Sept. 30. The bishops discussed religious rights issues at their June meeting and the decision to create the committee was finalized by their Administrative Committee in September.